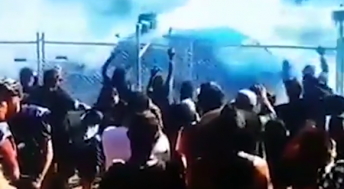 A group of spectators watching a car perform burnouts at the Red Centre NATS pic: Facebook

Twelve spectators have been hospitalised following an incident at the Red Centre NATS event at the Alice Springs Inland Dragway.

A car conducting burnouts at the facility has been reported to have sprayed fuel towards the crowd which subsequently ignited.

Event organisers have confirmed that the group of injured spectators were taken to Alice Springs Hospital for treatment.

One person is currently in a critical condition, while the other 11 are listed as being in a serious but stable condition.

A report from the ABC claims that several people suffered burns.

The event was cancelled following the incident which is currently being investigated by Police.

“Northern Territory Major Events Company can confirm that an incident at the Alice Springs Inland Dragway involving a flash fire from a competition car has resulted in burn related injuries,” read a statement from event organisers.

“Twelve patients are currently being treated at Alice Springs Hospital. One patient is in a critical condition and the remaining 11 are in a serious but stable condition.

“This is a distressing situation however all patients are receiving the care they need.

“Due to the incident, the organisers ceased the competition so the focus can be on the people who are in need of assistance.

“Northern Territory Major Events acknowledge the respect that attendees gave to the situation and encourage any spectators affected to seek support and medical assistance.

“Police are currently investigating and further updates will be provided in the morning.”