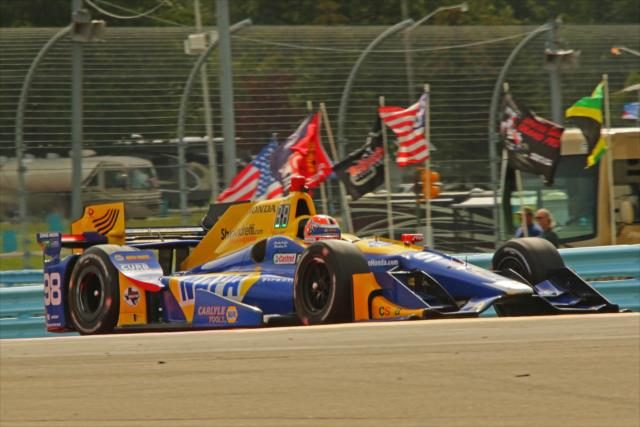 Alexander Rossi has earned his first Verizon IndyCar Series pole in qualifying for the penultimate race of the season at Watkins Glen.

Rossi (Andretti Autosport Honda) snatched pole from Scott Dixon after the chequered flag by just 0.0529s, while Will Power missed the Firestone Fast 6 and will line up eighth on the grid.

Dixon (Chip Ganassi Honda) had been classified in first position when the clock timed out, with Josef Newgarden (Team Penske Chevrolet) just a single ten thousandth of a second slower.

The series leader might have surpassed the New Zealander, and probably done enough to beat Rossi’s later time, but got sideways when he put a wheel off track exiting Turn 9.

Instead it was Rossi who came around to go to the top, just a day after announcing his renewal with Andretti Autosport in a multi-year deal.

The top three all broke the track record which Dixon set in qualifying one year earlier.

Power (Team Penske Chevrolet) missed the Fast 6 by 0.1165s and will line up alongside Ryan Hunter-Reay (Andretti Autosport Honda), who qualified seventh.

Simon Pagenaud was the fourth of the Penske cars in 12th.

Race start is Monday at 0340 AEST, with a distance of 60 laps to complete.

Qualifying: Grand Prix at The Glen