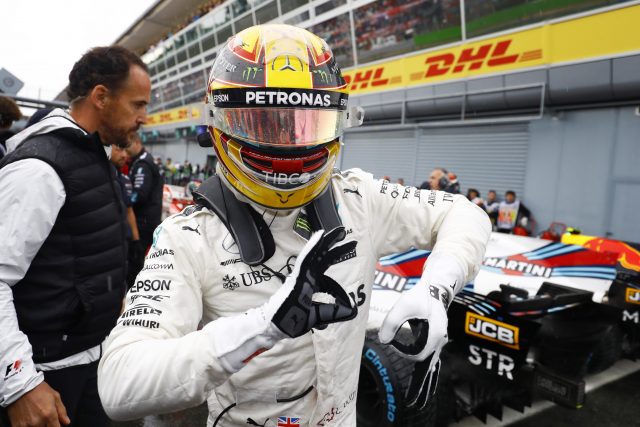 The Mercedes driver claimed his 69th career pole position after being forced to wait more than two and half hours for inclement weather to improve at the Monza circuit.

“I came across the line and I didn’t know I had it,” said Hamilton.

Qualifying began amidst heavy rain but was soon red flagged six minutes into Q1 after Romain Grosjean found standing water and subsequently crashed his Haas F1 on the start/finish straight.

The Frenchman emerged from the incident unscathed but was adamant the conditions were not sufficient for the session to begin.

As rain continued to fall, the start/finish straight proved an area of concern with the effect of standing water heightened due to a recent resurface.

“Spinning on a straight is not what you should see in Formula 1. We shouldn’t have gone out at all, I’m pretty straightforward on that,” said Grosjean.

The crowd who remained at the circuit were treated to a thrilling qualifying session once the action resumed.

Hamilton was pushed hard by the Red Bulls of Daniel Ricciardo and Max Verstappen, before the three-time world champion produced an impressive 1:35.554s on his final lap to claim a record breaking pole.

The time demoted Verstappen from provisional pole to second while Ricciardo was third.

Hamilton will therefore share the front row with Williams’ Lance Stroll who will benefit from the Red Bell penalties after qualifying a highly commendable fourth.

The 18-year-old will become the youngest driver to start on the front row.

Fellow young gun Esteban Ocon secured third on the grid for Force India ahead of the sister Mercedes of Valtteri Bottas.

Ferrari struggled for pace in the wet conditions with Kimi Raikkonen fifth and Sebastian Vettel only sixth.

Fernando Alonso, who faces a 35 place grid drop, will share the final row of the grid with Grosjean.