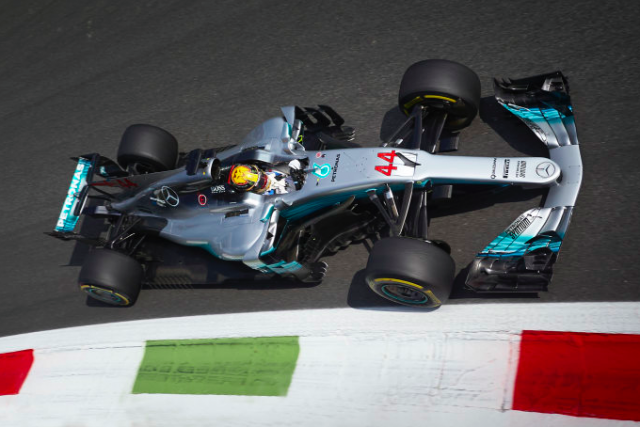 After breaking the all-time pole position record in qualifying, Hamilton produced a dominant display to head a Mercedes 1-2 from team-mate Valtteri Bottas.

Ferrari’s challenge failed to materialise on home soil as Sebastian Vettel could only claim the final podium place.

Hamilton’s sixth victory of the season has seen the three-time world champion move to the top of the standings with a three point margin over Vettel.

Red Bull’s Daniel Ricciardo provided arguably the drive of the day as he charged from 16th on the grid to fourth.

The Australian, who was hit with a 25 place grid penalty for an engine and gearbox change, made the most of an impressive long opening stint on softs to climb up the order.

He set the fastest lap of the race in the closing stages while trying to reel in Vettel.

Hamilton successfully converted his pole into the lead as the rest of the field squabbled for position at the first chicane.

Raikkonen briefly passed Bottas before the latter regained the position by the end of the opening lap.

Bottas soon latched onto the rear of Stroll’s Williams and soon took third.

Further back, Max Verstappen managed to climb from 13th on the grid to eighth, but his race unravelled when he suffered a front right puncture following contact with Felipe Massa (Williams), while fighting over seventh.

The incident was investigated by the stewards who deemed neither driver was at fault.

Verstappen was forced to pit for a new front right which dropped the Red Bull driver to the rear of the field.

At the front, Hamilton streaked away into a comfortable lead from Bottas who managed to pass Ocon for second.

Vettel held sixth in the opening laps but by lap eight he managed to surge to third after passes on Raikkonen, Stroll and Ocon.

Meanwhile, Ricciardo scythed his way through the field from 16th on the grid into the top five.

Raikkonen was the first of lead group to pit which resulted in a successful undercut on Ocon and Stroll, the latter suffered a slow stop caused by a delay on the left rear.

Team-mate Vettel pitted from third on lap 32 which sparked leader Hamilton to duck into the pit lane a lap later, with Bottas following suit.

Hamilton retained the lead from Bottas while Ricciardo assumed third as he took advantage of a long stint on the soft tyres.

Ricciardo eventually made his mandatory stop with 15 laps remaining, rejoining in fifth behind the Ferrari duo of Vettel and Raikkonen.

The Australian wasted little time as he stormed by Raikkonen at the first chicane to grab fourth, before setting his sights on Vettel.

However, Hamilton proved unstoppable at the front as he took the win from Bottas, Vettel and Ricciardo.

Raikkonen came home in fifth ahead of Ocon, while Stroll just held off team-mate Massa and Force India’s Sergio Perez for seventh.

The top 10 was completed by the recovering Verstappen.

Jolyon Palmer was the first retirement from the race when his Renault suffered a suspected mechanical problem with 21 laps remaining.

The championship heads to Singapore for the next round from September 15-17.