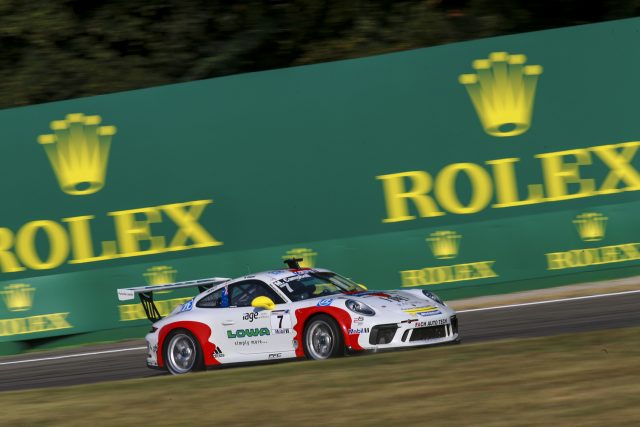 It is the second race win of his Supercup career after victory earlier in the season at the Red Bull Ring in Austria.

After starting from pole, the Queenslander got a great start to head to Zaid Ashkanani, Dennis Olsen and championship leader Michael Ammermuller into the Variante del Rettifilo first chicane.

However, behind Dylan Pereira and Daniele Di Amato came together and were left stranded on the side of the circuit; bringing out the Safety Car.

The race re-started on Lap #4 with Campbell backing the field up through the Variante Ascari, before charging off down the back straight.
His biggest ally was Ashkanani, who came under pressure from Olsen and Ammermuller. However, the UAE driver gapped the championship leaders and they soon became embroiled in their own battle.

All the time this allowed Campbell to pull a big lead, which he held through to the finish.

“I’m really pleased to have won this race,” said Campbell.

“After the first lap there was a brief safety car phase because a car went into the gravel. My restart went really well and that was the key to success.

“I managed to build on my lead and bring my win safely home.”

Campbell may have been cool at the head of the field, but the same can’t be said for others with the occasion of racing at Monza seeing a number of collisions and near misses.

Ammermuller was involved in a number of those incidents, including some contact with Olsen, which saw him drop back as far as 13th before clawing back to 10th at the finish.

That was just one place behind the man who came into the event sitting third in the points, Dan Cammish. He is now back to fourth with Campbell climbing to third thanks to his race win.

After sitting in third, Olsen slipped back to fifth closing the gap between he and Ammermuller at the head of the championship standings to just three points.

Campbell’s performance comes at a perfect time with his attention now switching to the Supercar endurance races at Sandown, Bathurst and the Gold Coast where he will share the Red Bull Holden Racing Team Commodore of Shane van Gisbergen. Campbell will fly directly from Milan to Brisbane for testing at Queensland Raceway in the middle of the week.

His next Porsche Mobil 1 Supercup race is the final twin-race event as part of the Mexican Grand Prix on the final weekend of October.

VIDEO: Drivers speak after the race