Bottas fastest as Mercedes sets the pace at Monza

Bottas fastest as Mercedes sets the pace at Monza 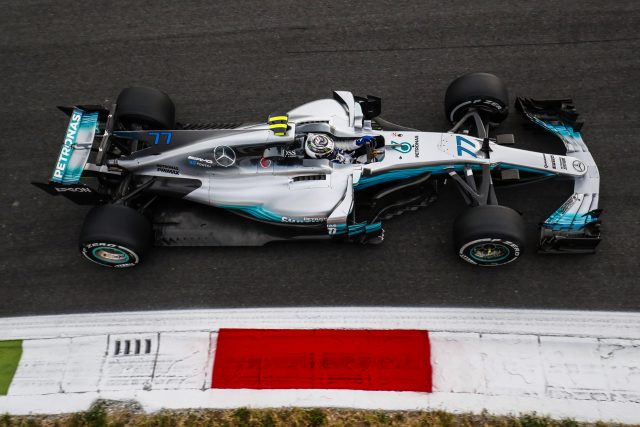 Valtteri Bottas emerged fastest in Friday practice as Mercedes made a strong start to the Italian Grand Prix weekend.

Bottas posted a 1:21.406s lap on super-soft tyres in Practice 2 to top the overall times with a 0.056s margin over Hamilton, who headed the opening 90 minute practice session.

Ferrari struggled to match Mercedes on home soil before closing the gap in the afternoon session.

Sebastian Vettel managed to log a time within 0.140s of Bottas, while the sister Ferrari of Kimi Raikkonen was fourth almost three tenths slower than the four-time world champion.

Red Bull once again proved the best of the rest as Max Verstappen enjoyed a 0.3s gap over his team-mate Daniel Ricciardo to claim fifth spot.

The Milton Keynes operation is set for a challenging weekend after undertaking a range of engine component changes.

As a result, the team will take 20 and 15 place grid penalties for Ricciardo and Verstappen respectively.

McLaren showed encouraging signs with Stoffel Vandoorne and Fernando Alonso seventh and eighth on the timesheets.

The increase in performance arrives following the emergence of an upgraded version of the Honda engine, which has seen both drivers incur 35 place grid penalties for power unit changes.

The top 10 was rounded out by Force India’s Esteban Ocon and Williams’ Felipe Massa.

The only casualty of practice was Toro Rosso’s Carlos Sainz who suffered an engine failure in Practice 2.

He headed into the session having already been hit with a 10 place grid drop after the team elected to change the MGU-K.

Meanwhile, Williams’ Lance Stroll endured a spin at the Ascari chicane before going on to finish 15th fastest.