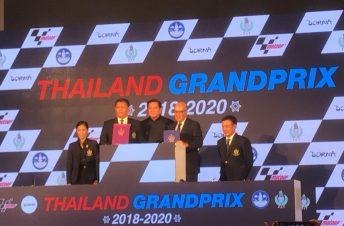 Thailand will host the MotoGP world championship for the next three years, category promoter Dorna Sports has announced.

The addition to calendar, which had been rumoured for some time, was confirmed in Bangkok as per Dorna’s statement of two days earlier revealing that a contract would imminently be signed.

Thailand will host a round of the world championship for at least the period 2018 to 2020 at the Buriram United Circuit.

World Superbikes, which Dorna also promotes, has held a round of its championship at the same circuit since 2015.

“Thailand is a big consumer of bikes also and they are happy to use MotoGP to develop tourism here in Thailand,” said Dorna Sports CEO Carmelo Ezpeleta.

“We are very proud to have made this agreement with the Thai government.

“The races here so far have been Superbike – who will also renew the contract in the near future – and we see that there’s a lot of expectation. MotoGP has had a lot of interest in Thailand, and it’s sure to be a Grand Prix with a lot of interest from everyone.

“We need to fix some of the dates but the calendar is finished, and I hope we can soon announce the draft calendar for 2018.”

Buriram will be the first brand new MotoGP circuit since the Argentine Grand Prix was revived at the Autódromo Termas de Río Hondo in 2014.

Austria and the Red Bull Ring (formerly A1 Ring) returned to the calendar last year, while the Finnish Grand Prix will be reinstated at the brand new KymiRing in 2019.

Thailand and Finland bring the season to 20 races, the current cap, assuming no current races are dropped.

Any other additions to the calendar would therefore be at the expense of existing venues under the terms of Dorna’s current contract with manufacturers and private teams which runs until the end of 2021.