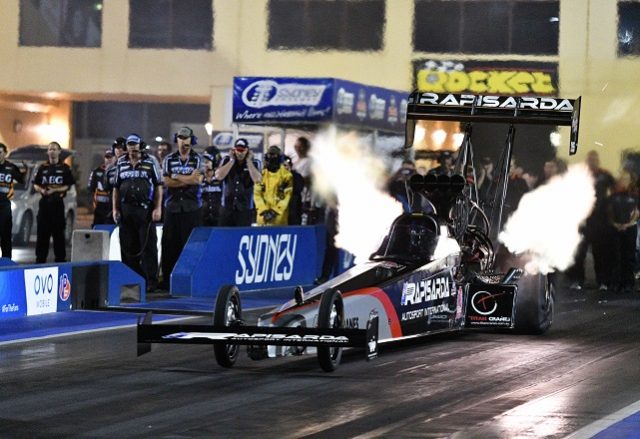 While the matter is set for discussion at Top Fuel Australia’s (TFA) annual general meeting in a fortnight, the owner of Rapisarda Autosport International (RAI) has already issued an ultimatum in a statement distributed to media.

Rapisarda has called for the Sydney Dragway and Willowbank Raceway to match the American NHRA standard of 1000ft (305m) distance rather than the traditional quarter-mile (1320ft / 402m) due to the increasing speeds of modern dragsters.

The NHRA reduced the length of its racing distances in 2008 shortly after the death of Scott Kalitta.

Top Fuel and Funny Car competition in the USA has since been limited to the shorter distance.

Rapisarda is calling for the same changes to be made in Sydney and Willowbank when the new 400 Thunder Top Fuel season commences in November.

“I will not race quarter mile again,” said Rapisarda.

“The time has arrived for Australia to abandon the 1320ft race distance on the grounds of safety.

“I have been giving this a lot of thought and my mind was made up at the 2017 Winternationals when both our cars ran over 330mph.

“It was a historic moment for the team but when you run at those speeds the risks are too great.

“The NHRA made the decision to abandon quarter-mile racing in 2008 when Scott Kalitta was killed.

“I consider both our current drivers Damien Harris and Wayne Newby to be part of the Rapisarda family and could not live with myself if anything were to happen.”

Rapisarda says that his lawyers have already sent correspondence to both tracks raising his concerns, particularly that drag cars have simply become too fast for facilities’ current braking distances.

However, according to TFA Manager Bruce Read, the matter was already set for discussion at the association’s upcoming annual general meeting.

“The 1000ft racing issue has been discussed over about the last three or four months after the completion of the (2016/17) season,” Read explained to Speedcafe.com.

“Santo initially raised 1000ft racing back in February, and he raised it again after the Winternationals.

Any change would have to be voted on by TFA members before ratification by the 400 Thunder Commission, which has already sought recommendations from TFA.

Read also suggested that the change to a 1000ft distance was not primarily a safety imperative in Australia, due to various contingencies and the relatively modern state of local tracks.

“They shortened the racing distance because a lot of tracks in America were built in the fifties and sixties,” said Read.

“We’ve implemented containment devices, we have the Electrimotion shutoff system now (which allows an engine to be shut down and parachutes deployed remotely), we have these safety items in place now.

“Given that a lot of the tracks in Australia were built after 2000, most of them are up to standard anyway.

“Calder Park and Adelaide certainly aren’t up to standard for quarter-mile racing and subsequently they are already at 1000ft racing.

“Sydney Dragway, Willowbank Raceway, the Perth Motorplex, and Hidden Valley are all more than capable of handling quarter-mile racing.”

Read claimed that while two teams are strongly opposed to the change, most members are open to the possibility.

“I guess the purists will say we should stay at a quarter-mile but to be relevant to the rest of the world it’s probably pertinent that we should change to 1000ft.

“Ultimately that will be up to the teams when they vote and we’ll do that accordingly and then Santo can decide what he wants to do.

“Most of the teams are kind of blasé about whether they would change.”

While Willowbank Raceway had not responded by the time of publication, a spokesperson for Sydney Dragway told Speedcafe.com that, “When Top Fuel races at Sydney Dragway, it is part of the 400 Thunder Series. We take direction from 400 Thunder with respect to this issue.”

Meanwhile, RAI is this weekend competing at the NHRA’s flagship meet, the US Nationals.

Australian Richie Crampton has also been called up to race at the event which he won as a rookie in 2014.