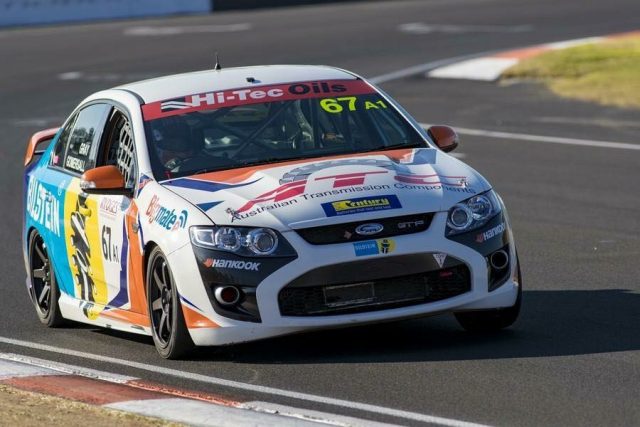 The Falcon at April’s Bathurst 6 Hour

George Miedecke and Jeremy Gray will team up in the latter’s GT Falcon for this months’ Australian Production Cars Island Four Hour.

Formerly team-mates and also rivals in V8 Utes, the pair will drive the Ford which debuted in April’s Hi-Tec Oils Bathurst 6 Hour.

The start will be Miedecke’s first since February’s Liqui-Moly Bathurst 12 Hour, when he crashed after suffering carbon monoxide poisoning due to a loose driver cooling vent.

The Port Macquarie driver says that he is looking forward to driving the Falcon, on which development has continued since April.

“The work that Jeremy and the whole team put into the car is evident,” said Miedecke.

“I’m really excited to work with the guys and I know Jeremy will get the most out of the big girl!

“I’m told a couple of extra developments will be applied before we hit the track and we’re certainly not going there to come second.”

The GT’s Falcon came to an early end when then-driver Jason Gomersall was caught up in a moment for Tony Virag on Lap 3 of the Bathurst 6 Hour.

However, Gray is confident that the JMG Maintenance-backed Ford will be competitive at Phillip Island after recent further work on the car.

“A couple of teething issues got in our way at Bathurst; no excuses,” said Gray.

“But our team have done a great job working out a few of the kinks that always come with a brand new car.

“We tested at Sydney Motorsport Park recently and man, this thing is fast now.

“I’ve known George a long time and am excited to see what he produces as he’s world class for sure.

“The last time we raced together we won the V8 Utes ‘Legends’ race at Clipsal (Adelaide, 2010) so we are hoping for more of the same.”

The Island Four Hour is part of the Shannons Nationals bill at Phillip Island on September 8-10.