McLaren on brink of Honda split

McLaren on brink of Honda split 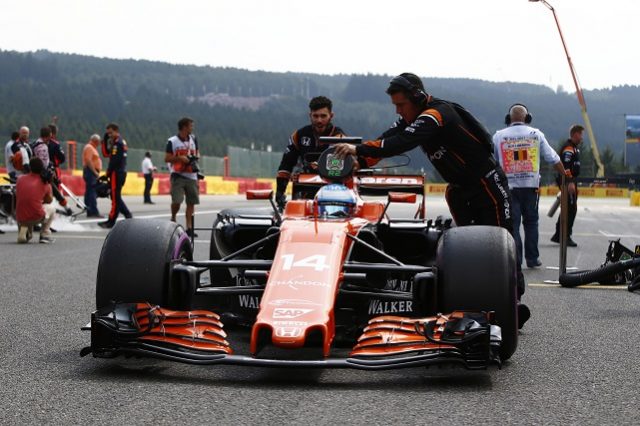 Fernando Alonso on the grid at Spa

McLaren is close to ditching engine supplier Honda in a move which it is believed would secure the renewal of Fernando Alonso.

The team is working hard on discontinuing its Honda agreement and moving to Renault, with major talks set to take place this weekend.

McLaren is believed to have finally given up on Honda in the short term, and detailed analysis of gains Honda made with help from consultant Ilmor has not eased the concerns.

However, the machinations of a potential change are extremely complex as they involve McLaren, Alonso, Honda, Renault, and Scuderia Toro Rosso.

One source suggested it is not a case of whether McLaren splits with Honda, but of how messy the process gets.

The simplest way for McLaren to achieve its aim is to convince Honda to tie up with STR for 2018 and beyond.

That would free up STR’s Renault engine supply for McLaren.

STR would get a financial boost from Honda, which would be able to stay in F1.

Talks between STR and Honda appeared to have collapsed recently but are back on and now at an advanced stage.

At Spa last weekend, STR and Honda’s denial that there had been any “official talks” was intriguingly dispelled by McLaren, which revealed it had been asked to supply gearboxes for any potential deal.

However, sources suggest Honda is not especially eager to make the jump to STR and does not want to give up on McLaren.

That means there is a stand-off between McLaren and Honda, with neither party able to move forward at present.

With time pressure mounting, it is understood STR has laid down a deadline of Monza this weekend for a 2018 engine decision.

McLaren is believed to be adamant that it will not continue with Honda in 2018, but if it cannot transfer its engine supply to STR smoothly there is a risk it will have break its current engine contract and face legal complications.

Losing McLaren without an alternative team in place would force Honda out of F1 too, something Liberty Media is not keen on.

Honda’s departure would open up a scenario where FIA rules dictate that one of the current engine manufacturers must supply McLaren for 2018.

Renault remains the most likely option in this scenario, and though it is reluctant to expand to a fourth supply the rules could leave it with no choice.

Switching engine supplier is believed to be key to McLaren keeping Alonso.

It is understood he has indicated in private that if McLaren is able to secure Renault engines then he will remain on board.

Progress made with the chassis and the new era at the team after Ron Dennis have left Alonso encouraged about McLaren’s future.

The Honda engine is the only stumbling block, with Alonso’s desire for a Renault switch adding further impetus to McLaren’s current mission.