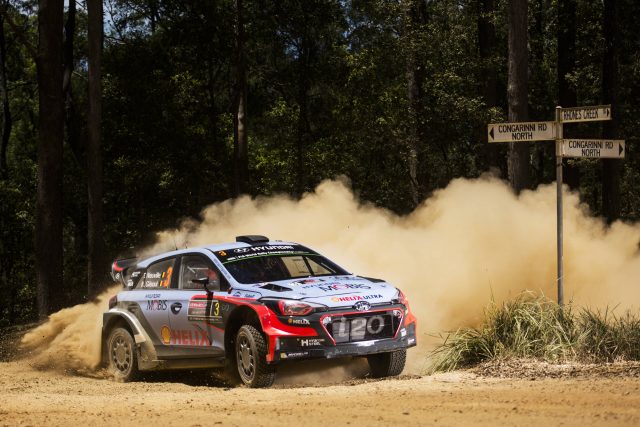 Rally Australia appears set to remain on the World Rally Championship calendar next season with official confirmation expected in the coming weeks.

The Coffs Harbour event is in the final year of its current three-year deal, with organisers confident of a new contract for next season.

Rally Australia has featured on the calendar annually since 2013 and will play host to the final round of the WRC this year (November 16-19), after securing the berth last season.

The round has been included on a draft calendar for 2018 which is set to be discussed at next month’s meeting of the FIA World Motor Sport Council.

Australia’s inclusion follows news that a bid from New Zealand to join the schedule has fallen short.

While its future is yet to be officially ratified, Rally Australia has confirmed that it will receive continued funding from the New South Wales Government until 2020 at least.

“We’re on the calendar for 2018, and we expect that we’ll remain there,” said Rally Australia clerk of the course Wayne Kenny.

“The WRC promoter has already stated that he doesn’t think New Zealand will be there due to a lack of funding, and I think Croatia had an issue with dates.

“So logically, if you look at what’s available around the world, we’re the obvious choice to remain where we are.

“The 2018 event will be the only contract that we’ll get.

“We won’t get ’19 and ’20 straight up, because there are no three-year contracts going at the moment.

“We were the first event to get a three-year contract, now there’s only 12-month contracts.

“There are numerous countries trying to come into the championship, but we’re in a solid position. We’re reasonably confident we won’t have a problem.

“The New South Wales government is fully supportive of the event, and I think this year will really prove that we’re capable and this will be the best event yet.”

It is expected that the rally will retain its final round berth and its third weekend in November date slot, which will see the event avoid a clash with Supercars’ Newcastle 500 season finale.

“We checked with Destination NSW, who are a major sponsor of the Supercars and we’ve been advised by them that our date is fine, no problem. And Supercars will be the following weekend, the same as it is this year.”

Facing an uncertain future, Rally Australia enhanced its event last year with the inclusion of a new Super Special stage on the Coffs Harbour waterfront, among other changes, in a bid to impress the FIA.

Kenny believes their attempts have paid off having received glowing reports from the global motorsport governing body.

“It (the efforts of last year) certainly did work. And again, we’ve modified that Super Special Stage so it’s even better and more exciting this year,” he added.

“We’ve had nothing but glowing reports from the FIA. Our safety, everything we do is world-class, and better than, I would say, every event except possibly Finland.”

Rally Australia has confirmed a new free-to-air television deal with Channel Nine alongside further changes to its Super Special stage at the official event launch on Tuesday.