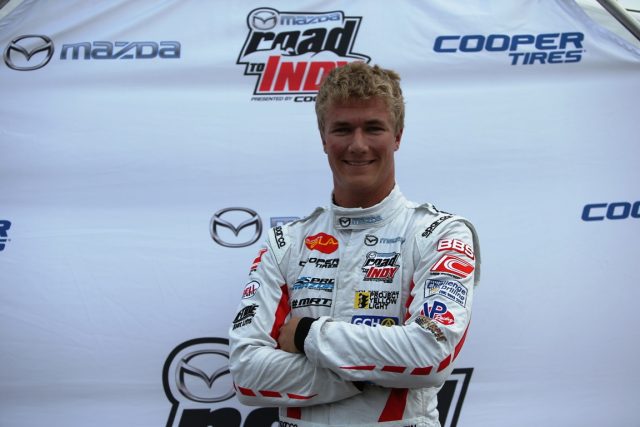 Australian Anthony Martin will face a head-to-head battle with Victor Franzoni for the Pro Mazda title in this weekend’s final round at Watkins Glen.

Martin lead the race early on and went on to finish second in a context reflective of the two-horse competition in Pro Mazda this year.

In the 10 races to date, Martin and Franzoni hold five wins apiece, while the former has taken five poles to Franzoni’s three in nine qualifying sessions, and Franzoni leads Martin in race fastest laps by five to four.

“It seems to always end up that way, with two guys going for the title,” said Martin.

“It’s a little bit harder because instead of focusing on yourself, you catch yourself thinking about beating them.

“It makes you push harder and gives you that determination to really go for it.

“Victor would probably say the same thing, that he’s pushing as hard as he can and wants to beat me more than anything.

“Every race has been crazy and it’s been a lot of fun.” 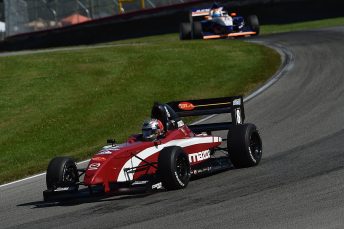 Martin is on a steady rise through the open-wheeler ranks, winning the 2013 Western Australian Formula Ford Championship in his home state before finishing runner-up the next season.

In 2015, he moved to America to contest the USF2000 Championship, the bottom rung on the Mazda Road to Indy (MRTI) ladder, and won that title the following season with Cape Motorsports.

Should he and Cape Motorsports taste championship success this year in the next rung on the MRTI ladder, the Kalgoorlie native would be the first driver to win the titles in successive seasons since Matthew Brabham in 2012 and 2013.

Martin would also earn a scholarship from Mazda worth over US $790,000 to progress to the Indy Lights series, one tier below the IndyCar Series, in 2018.

“It would mean everything,” said the 22-year-old of the prize.

“Honestly, it would be difficult for me to run an Indy Lights program without the scholarship, so I have to win.

“It’s a bit mind-blowing, that Indy Lights is only one step away from the Verizon IndyCar Series.

“There’s even the chance of getting a test drive in an IndyCar and that’s just crazy for me to think about.

“I never thought that would be something I could do. It’s unbelievable.”

Practice for the final round of Pro Mazda will take place on Friday September 1, with a race on each of the following days (local time).