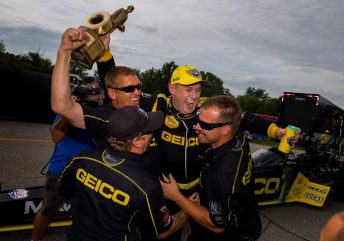 Crampton, who won the US Nationals in his rookie season in 2014, had been out of the NHRA Top Fuel division after his former team Morgan Lucas Racing ceased operations at the end of the 2016 season.

He will now take over one of Kalitta Motorsports’ Top Fuel dragsters for the remainder of the 2017 season after rookie Troy Coughlin Jr. stepped out of the seat.

“It was a huge honour to get the call from Jim O (Oberhofer, Vice President of Operations at Kalitta) asking if I could finish out the year with the team,” said Crampton.

“Connie Kalitta is a legend, and for me to get an opportunity like this is unreal.

“I am excited to jump into the SealMaster Toyota dragster and see what we can do.

“I never knew if I was going to be able to drive a Top Fuel dragster again, so I am extremely grateful for this opportunity.”

Crampton started in NHRA as a crew member at Morgan Lucas Racing in 2007 before his meteoric rise to glory in the US Nationals as a rookie.

The South Australian, now based in Indianapolis, has amassed seven wins in his career to date.

The 2017 US Nationals begins on the evening of Friday September 1 (USA time), with eliminations starting on Monday.