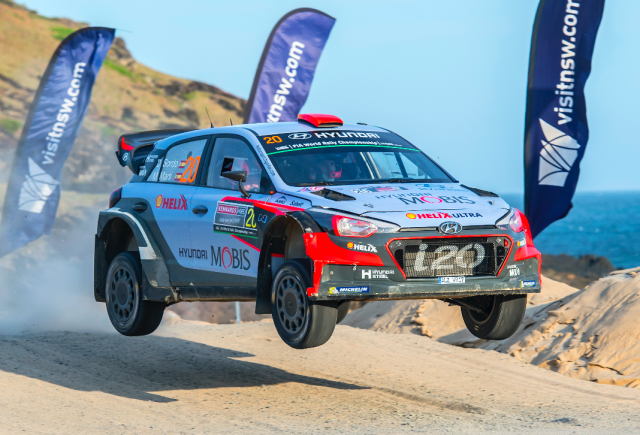 Rally Australia will once again be shown on Channel Nine

Organisers confirmed at an event launch in Coffs Harbour that the arrangement struck last year will continue for the November 16-19 New South Wales event.

The deal will see Nine broadcast live coverage from the final Power Stage on Sunday with a 90 minute show.

This will be boosted by preview, review shows and daily highlights programs.

“The Channel Nine deal, that is excellent,” said Rally Australia clerk of the course Wayne Kenny.

“What we’ve achieved there is, from last year, they were probably sceptical about what we could deliver and what we couldn’t.

“They were very happy with the results of last year and that’s helped us to cement the deal for this year.”

A full broadcast schedule is expected to be issued leading up to the rally.

The arrangement will once again run alongside the championship’s current deal with Fox Sports, which broadcasts live action from the entire WRC season.

Launched last year, the stage held on the Coffs Harbour waterfront proved a hit among spectators as the world’s best drivers tackled a technical test with the ocean as the backdrop.

This year fans will see drivers complete a new route incorporating an extra loop of the stage, ensuring the fans see the cars in action for longer.

A new roundabout jump will be installed which is expected to provide a spectacular start to the stage.

This will join the motocross berm and beachside jump which emerged as the highlights of the stage among fans last year.

Competitors will complete two runs through the stage on Friday and Saturday during the event, with the runs set to be called by television personality and petrol head Shane Jacobson.

The rally will open with a brand new run of stages on the Friday which was confirmed earlier this year.

“Overall distance is about the same, but the spectators get more bang for their buck because they’ll see the cars for much longer right in front of them. So it’ll be very exciting,” Kenny added.

While the Super Special stage has undergone changes, organisers have evaluated all of its stages given this year’s specification WRC cars will reach higher speeds.

“We’ve looked at the speeds these new cars are attaining and we believe we will still be within all the safety requirements of the FIA with the event,” Kenny added.

“We’ve had Chris Atkinson come out and check out all our new stages and he has given them the tick.

“It’s gone back to the FIA and they’ve approved them as well, so it’s now just a matter of seeing how the actual new cars go.

“They’re about 0.3s per kilometre quicker, so that certainly adds up over a period of time, but overall the cars will be absolutely sensational here.”