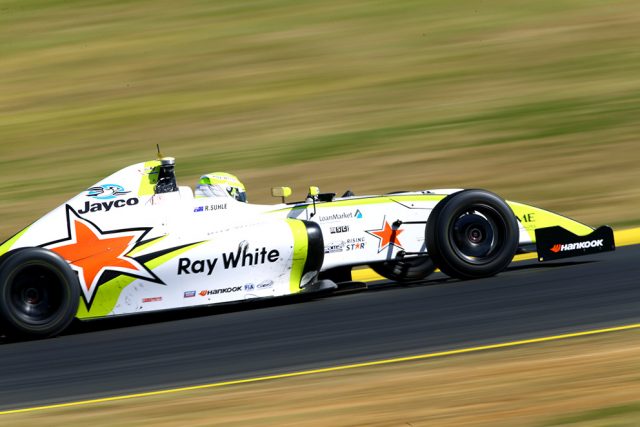 The reborn CAMS Foundation Rising Star program will continue into the 2018 Australian Formula 4 Championship, the governing body has announced.

CAMS has confirmed that up to four $50,000 scholarships will again be eligible to drivers as part of the Rising Star program which returned this year.

There will also be a further eight scholarships on offer from CAMS each year until at least 2020.

“We are really excited about what lies ahead as we look to develop the next wave of junior drivers,” said CAMS CEO Eugene Arocca.

“CAMS has been committed to supporting an internationally relevant single seater category from day one.

“The success of the CAMS Jayco Formula 4 program in nurturing drivers for both the international and national stage is evident with more young Australian drivers competing overseas than at any stage in our recent history.

“With more Formula 4 drivers around the world achieving success in everything from F3 to F1, the future is very clear.”

CAMS has also revealed that the 2018 calendar will take on a similar look to this year’s.

As is the case in 2017, there will be seven rounds across six events, including a double-header at a Shannons Nationals meet (hosted this year at Sandown in April).

However, where another round took place at May’s Phillip Island Shannons Nationals meet this year, CAMS has foreshadowed the possibility of a round in New Zealand next year.

The 2016 season was originally scheduled to end at Tony Quinn’s Highlands Motorsport Park as a support to the Australian Endurance Championship, but the round was removed from the calendar before the season began.

The lease system will also continue, alongside the option to purchase cars outright which became available this year.

“We’re making sure there is longevity for Formula 4 teams, which will ultimately allow more drivers to take part in the category, with the continuing goal of helping develop the next stars of Australian motor sport,” explained Arocca.

A test day will be held at Winton Raceway on September 26, allowing prospective competitors to sample the cars.

Nick Rowe leads the 2017 CAMS Jayco Australian Formula 4 Championship with one round remaining, at the Vodafone Gold Coast 600 on October 20-22.