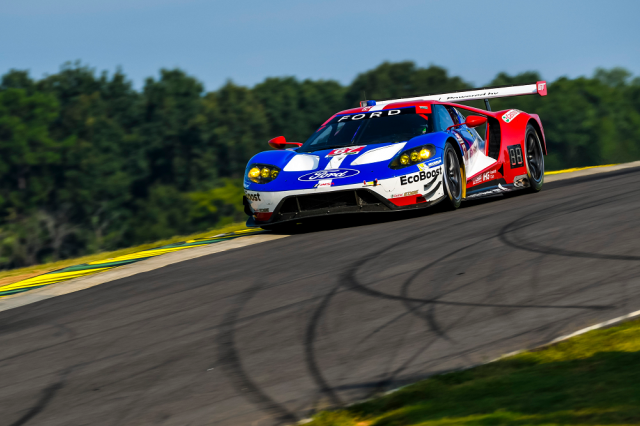 Sims had taken the lead from the outside of the front row in the #25 BMW Team RLL BMW M6, and Bill Auberlen kept them in front through the middle stint of the 2hr 40min race.

However, a puncture cost them top spot in the final 15 minutes.

Milner attempted to get underneath Mueller at the end of the back straight but the two hit and spun.

The Prototypes rejoin the field for the next round at Laguna Seca on September 21-24. 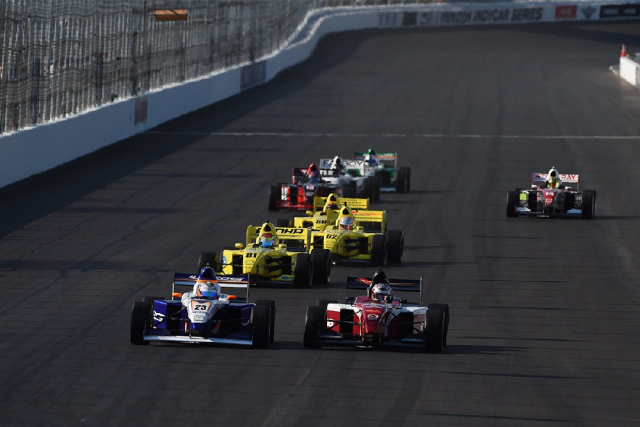 Anthony Martin will head to the final round of the season with a two-point deficit to Victor Franzoni after the Brazilian won at Gateway Motorsports Park.

Franzoni (Juncos Racing) rounded up the Australian Martin (Cape Motorsports) on Lap 19 and lead for the remaining 35 laps.

The bonus points for the fastest lap and most laps lead have Franzoni ahead of what would otherwise be a tie for the lead of the championship, which finishes with a double-header at Watkins Glen on September 1-3. 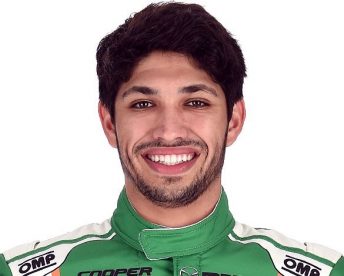 Kyle Kaiser has all but wrapped up the Indy Lights series as he finished fourth at Gateway Motorsports Park.

Santi Urrutia (Belardi Auto Racing) won the 75-lap encounter, which was a two-way fight for victory between he and the only other man to lead the race, Juan Piedrahita (Team Pelfrey).

Piedrahita took the lead back from Urrutia at the penultimate restart, before another yellow.

The lead swapped three times in the final sprint to the chequered flag, with Urrutia coming out on top.

Urrutia moves into second in the series with one race remaining at Watkins Glen (September 1-3), a race which Kaiser (Juncos Racing) need only start in order to be crowned champion. 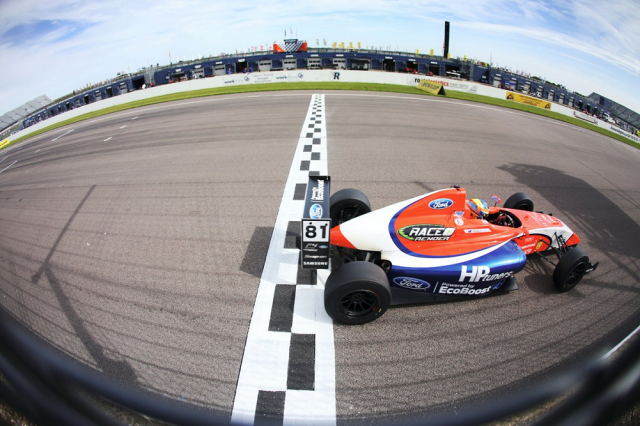 Oscar Piastri’s title hopes have taken a huge hit in Round 8 of British Formula 4 at Rockingham.

Having finished each of the first 21 races of the season in the points, Piastri failed to finish the first and third races at Rockingham.

The 16-year-old initially persevered in sixth with wing damage and a technical problem in Race 1, but ultimately succumbed to the problems.

In Race 2, he drove from last to seventh, ended up off the road while battling for position, and drove from last again to 10th at the finish, setting the fastest lap of the race.

Piastri spun on Lap 1 in Race 3 while trying to avoid another incident before a turbo component failure capped off what he described on social media as “possibly my worst race weekend in motorsport since I started karting all those years ago.”

Linus Lundqvist, Alex Quinn, and Logan Sargeant took a race win apiece, while Jamie Caroline could seal the title at the penultimate round at Silverstone on September 16-17. 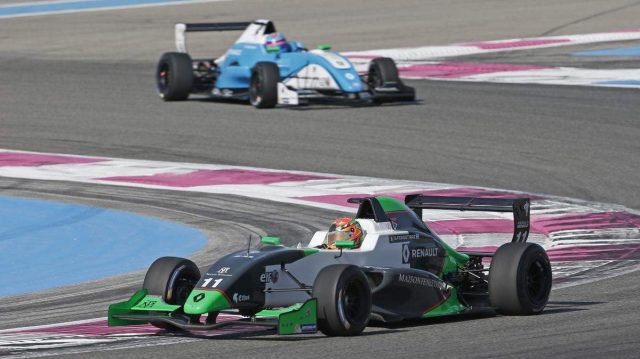 Max Defourny and Sacha Fenestraz won races at Paul Ricard while Thomas Randle was best of the five Australians.

Robert Shwartzman crossed the finish line first in both races but was penalised after Race 1 for a late move on Fenestraz which saw the Frenchman’s race end upside down, and excluded due to a technical infringement in Race 2.

Randle finished in the points in both races with results in ninth and 10th, Zane Goddard 10th and 28th, Thomas Maxwell 13th and 17th, Luis Leeds 18th and 18th, and Alex Peroni 21st and DNF, the latter due to early-race contact with Henrique Chaves.

Fenestraz still holds a handy 27-point series lead (the equivalent of just over a race win) ahead of the penultimate round at Spa on September 22-24. 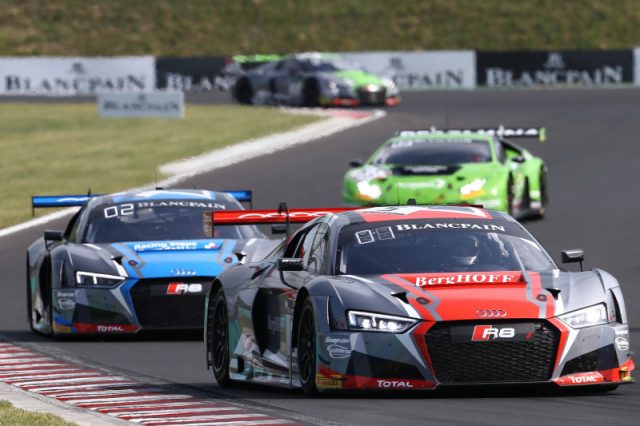 Dries Vanthoor and Marcel Fassler have backed up their Qualifying Race win with Feature Race honours in the penultimate round of the Blancpain GT Sprint Series at the Hungaroring.

Fassler came under pressure during his starting stint but still handed over the #5 Team WRT Audi R8 in the lead, which Vanthoor maintained until the end.

Pieter Schothorst/Jake Dennis were a narrow second in the #3 Team WRT R8, having jumped the #63 Grasser Racing Team Lamborghini Huracan of Christian Engelhart/Mirko Bortolotti in the pits.

Maxi Buhk/Franck Perera hold a narrow Sprint Cup lead ahead of the final round on September 15-17 at the Nurburgring.

The final round of the Blancpain GT Series in general will follow on September 30-October 1. 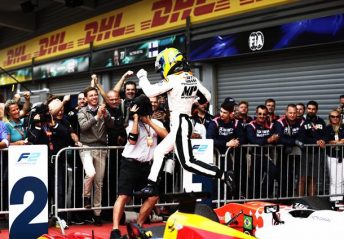 Artem Markelov and Sergio Sette Camara took the race wins in Round 8 at Spa.

Ferrari junior Charles Leclerc had dominated the Feature Race but was subsequently excluded after a post-race scrutineering check, handing victory to Markelov.

Sette Camara jumped from third on the grid to lead the field away in the Sprint Race and was never headed, while Leclerc came from rear of grid to finish fifth. 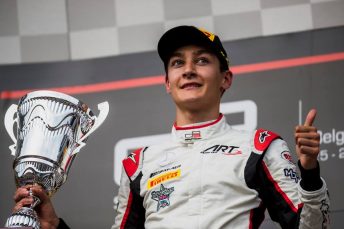 George Russell won an intra-team battle to take out the Saturday race before Giuliano Alesi won on the Sunday at Spa.

Russell battled with ART team-mates Jack Aitken and Nirei Fukuzumi, with Fukuzumi leading the middle portion of the race before Russell reclaimed the lead and pulled away.

Aitken also got by Fukuzumi and managed to hold him off at the end as they finished second and third respectively.

In Race 2, Alesi lead all the way from the start, having walked off the grid faster than pole-sitter Julien Falchero.

Russell finished that encounter in second and leads the championship by 36 points, with hostilities resuming in Monza on September 1-3. 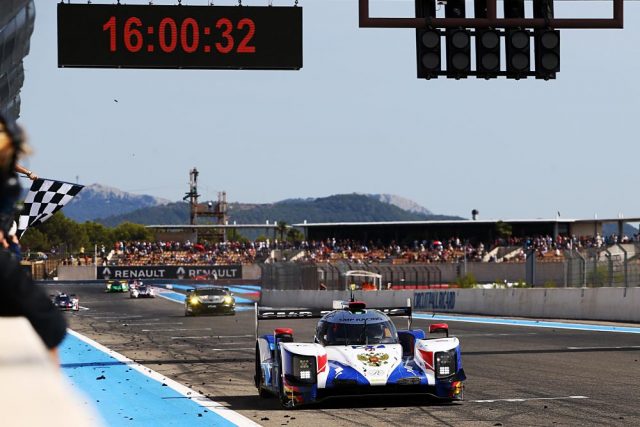 Their #27 LMP2 Dallara took over the lead of the four-hour encounter at the first round of pit stops and drove on to a comfortable victory. 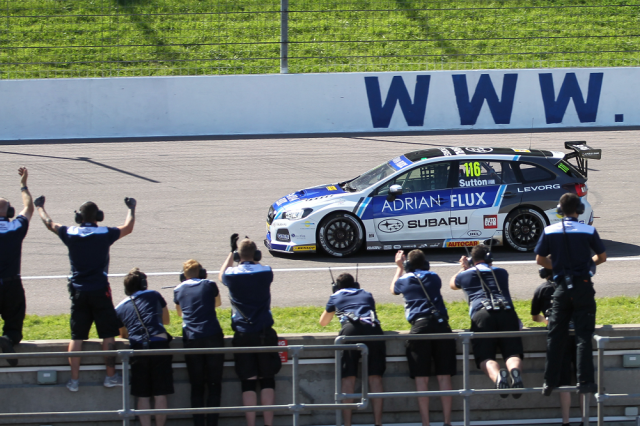 Ash Sutton has taken over the British Touring Car Championship lead with his sixth race win of the season at Rockingham.

Sutton drove around the outside of Cole at the start of Race 2 and went on to a comfortable victory, before finishing fifth in Race 3. 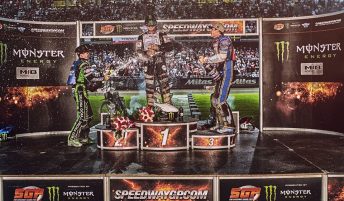 The podium in Gorzow

Jason Doyle has reclaimed the lead of the Speedway Grand Prix championship by finishing third in Gorzow, Poland.

Doyle won two of his five heats and his semi-final before finishing behind Tai Woffinden and Patryk Dudek in the final.

That pair had lead from the start of the final with Doyle assuming third due to an engine failure for Bartosz Zmarzlik on Lap 1 of the final.

Round 9 is in Germany on September 9.