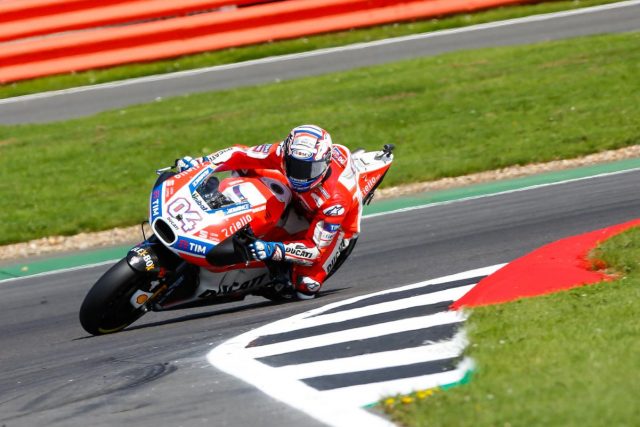 Andrea Dovizioso has won the British Grand Prix and taken over the MotoGP championship lead after Marc Marquez blew an engine.

Marquez was running third on Lap 14 of 20 when his Repsol Honda let go, while Dovizioso only took over first position from long-time leader Valentino Rossi on Lap 18.

Maverick Viñales deposed his Movistar Yamaha team-mate Rossi later on the same lap as they went on to finish second and third respectively.

Rossi made the best start from the middle of the front row and lead Marquez, Cal Crutchlow (LCR Honda), Viñales, Jorge Lorenzo, and Dovizioso through the opening corners.

Viñales passed Crutchlow before the end of Lap 1 and Dovizioso got by his Ducati Team team-mate Lorenzo on Lap 2 before soon applying pressure to Crutchlow.

Viñales took over second position from Marquez at the start of Lap 3 and Dovizioso fourth from Crutchlow later in the lap as Rossi’s lead got out to approximately 1.2s.

As expected, Viñales began to chip away at Rossi’s advantage having gone against the trend of the top 10 and started on a soft compound rear tyre.

However, Marquez, Dovizioso, and Crutchlow were keeping touch with #25.

Dovizioso used his Ducati’s horsepower advantage to pass Marquez at the end of Hangar Straight on Lap 6, but Marquez regained the position at Brooklands on Lap 10.

While Viñales had by then reduced the lead to less than half a second for the first time since Lap 1, Dovizioso made passes in consecutive laps to move to the front of the chasing pack on Lap 11.

That move triggered a frantic sequence of corners towards the end of the lap, with the position changing three more times as Viñales reclaimed second.

He would only hold it until Turn 1 on Lap 12, when Dovizioso got past for good and began to cut into a lead which had blown back out to over 0.9s as a result of the fight for second place.

Marquez moved back into the podium positions on Lap 12 before disaster struck two laps later when the #93 Honda popped.

Dovizioso had caught bike #46 on Lap 17 and made his move at Stowe next time around, getting the job done despite Rossi braking as late as he could on the outside.

Viñales relegated his team-mate another position at the end of Wellington Straight, putting paid to a fairytale result for Rossi in his 300th premier class race.

While the Spaniard then closed up on Dovizoso at the end, it was too little, too late.

Dovizioso thus took the chequered flag first for the fourth time this year, and with it the championship lead due to Marquez’s DNF.

“Really, thank you to the team.”

Crutchlow finished close behind the two factory Yamahas in fourth and Lorenzo re-passed Johann Zarco (Tech 3 Yamaha) during the latter half of the race to finish fifth, one position ahead of the Frenchman.

“I had a great race, I think that I gave the maximum from the beginning to the end.”

Aleix Espargaro was next in 11th before bizarrely crashing his Red Bull KTM at Turn 1 on the cool-down lap.

Jack Miller ran in the high teens for most of the race and ultimately finished 16th.

Andrea Iannone took out Danilo Petrucci (Pramac Ducati) when he lost the front end of his Suzuki Ecstar on Lap 18.

Jonas Folger had a nasty warm-up crash and failed to take the start, having qualified 10th.

The Tech 3 Yamaha rider was cleared of serious injury but still headed to hospital for further examination when he suffered dizziness.

The field now heads to San Marino’s Misano World Circuit Marco Simoncelli for Round 13 on September 8-10.

Championship points: After Round 12