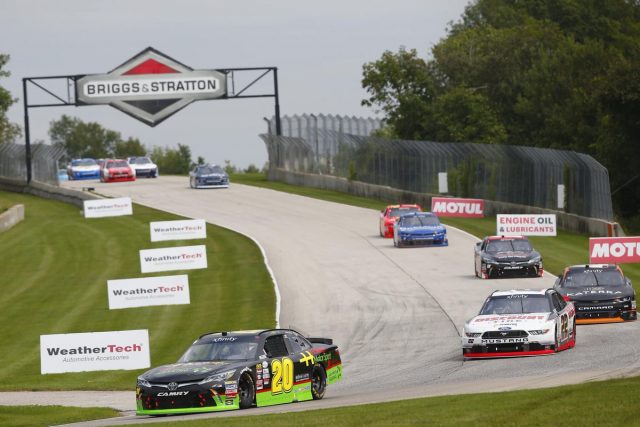 James Davison will leave Road America empty-handed having been taken out of the NASCAR Xfinity Series race after a super start.

Starting second on owners points after qualifying for the Johnsonville 180 was washed out, Davison won Stage 1 by over two seconds having lead all but one of the 10 laps.

However, he pitted the #20 Joe Gibbs Racing Toyota under Caution at the end of the stage and ended up speeding while exiting pit road, an offence which saw Davison put to the rear of the field for the restart.

The Australian nevertheless charged back through the field and was running seventh when he was cannoned into by Justin Marks during the final lap of Stage 2.

Marks had initially been pushed loose by Ross Chastain, while Austin Cindric was also caught up in the incident when he was tagged by the subsequently wounded Davison.

The collision ended Davison’s day due to radiator damage and he was classified 37th.

“Gutted,” was Davison’s response to reporters.

“We were going up the hill there out of 5 and I think (Chastain) got into (Marks) and just hooked him across the track and I was … just … I had nowhere to go. One of those incidents where you’re just an innocent victim.

“We had a car to win today. Obviously we showed that in the first stage.”

“I can’t tell you how much of a dream this has been to be a NASCAR driver at the front in the 20 car.

“We’ll be back next year. We showed enough; I showed enough behind the wheel as well to warrant getting back into the car.”

Before the end of Stage 2, several heavyweights tangled while battling for third. #Johnsonville180 pic.twitter.com/k2hnxLqDoR

A strategy battle over fuel and tyres ended up being settled on the track when Clements attempted a move on the second-last lap, causing both cars to spin.

Clements recovered quicker than Tifft to go on and take victory, with Michael Annett ultimately splitting them in second place.

Elliott Sadler, who finished 14th, leads the standings while Clements’ victory secures his place in the playoffs.

While Davison’s two-race deal with Joe Gibbs Racing is now over, the series continues with Race 24 of the season, the Sport Clips Haircuts VFW 200, at Darlington Raceway on September 2.