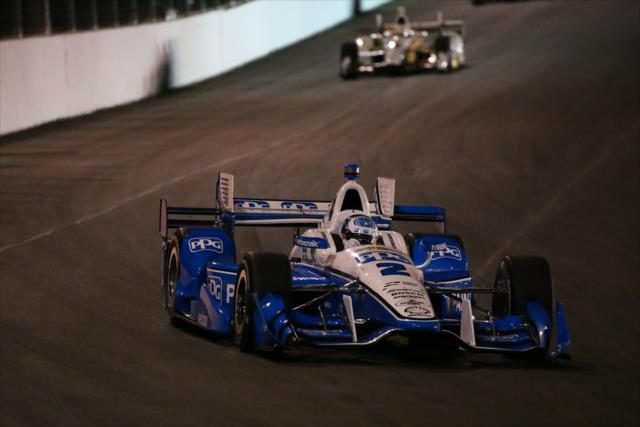 Josef Newgarden has won the Gateway IndyCar race thanks to a controversial move on team-mate Simon Pagenaud in a race which ended in despair for Will Power.

Newgarden made a huge lunge at Pagenaud late in the race which bumped the Frenchman aside, allowing Chip Ganassi Honda driver Scott Dixon to split the two Team Penske Chevrolet drivers on the podium.

The race started under Caution with Tony Kanaan backing his Chip Ganassi Honda into the wall on the warm-up lap.

Green flags flew for the first time on Lap 6, when pole-sitter Power similarly spun into the wall as he was rounded up by team-mate Newgarden at Turn 1.

Takuma Sato and Ed Carpenter joined him after they came together as the field checked up, the latter’s Ed Carpenter Racing Chevrolet mounting Power’s car.

“It was just slippery, it was super-slippery,” explained Power, who was not seriously hurt.

“I wish I’d done a few more burnouts to get some temp in the rear, but the front was very slippery too going in and Josef took my air on the exit and then I spun.

“I just tried to get back to power, got some dirty air I think, and man, it just went. Unfortunate.”

Sato managed to drive his Andretti Autosport Honda back to the pits but had picked up too much damage to continue.

The race finally got properly underway on Lap 19, with the all-Penske top three of Newgarden, Helio Castroneves, and Pagenaud pulling away from Dixon, who had moved up to fourth.

The first round of pit stops began on Lap 54, with no change to the top four before or during the cycle.

That pattern continued, with the remaining Penske trio putting more than five seconds on Dixon by the time the second Caution came on Lap 102 when a failure for JR Hildebrand pitched his Ed Carpenter Racing Chevrolet into the wall.

This time, however, Newgarden lost a position when he was held long in pit lane, Castroneves taking over the race lead.

The Brazilian gapped Newgarden by more than three seconds by the time he made his third pit stop at the end of Lap 157, despite complaining of right-front tyre blistering.

Critically, Castroneves stalled in the pit box when his neutral button apparently failed, costing him three positions by the time the stops played out.

That left Newgarden back in the lead, from Pagenaud, Dixon, and Castroneves, before a short run to Caution when Max Chilton found the wall in his Chip Ganassi Honda.

The front-runners chose not to top up, and Castroneves regained third shortly after the Lap 175 restart when Pagenaud chopped off Dixon and cost the New Zealander momentum.

Ryan Hunter-Reay prompted the final round of pit stops when his Andretti Autosport Honda brushed the wall on Lap 203.

Pagenaud just beat Newgarden out of his pit box and Dixon regained third position from Castroneves for the final run to the chequered flag.

Conor Daly (AJ Foyt Chevrolet) made a great restart on Lap 213, moving from seventh to fifth on the outside line.

Meanwhile, the top two quickly put a second on Dixon before Newgarden dived into the smallest of gaps at Turn 1 on Lap 218.

They made side-to-side contact as Newgarden squeezed past, and with Pagenaud nearly drifting up to the wall, Dixon seized second for the first time all night.

The move gave Newgarden a one second margin which he all but held for the remainder of the 248-lap race, while Dixon held out Pagenaud.

Newgarden laughed off the move, but Pagenaud was terse when asked about it post-race.

“It’s probably appropriate with everything that’s going on tonight with Mayweather and McGregor,” mused Newgarden with the bout between the MMA fighter and boxer taking place concurrently.

“It was an awesome race, I’m so proud of the whole #2 crew, I’m proud of Team Penske.

“They build the best race cars on the whole planet, so it’s a pleasure to be a part of the group.”

“I don’t know what to say. I don’t have anything nice to say so I’m not going to say it,” he remarked.

“There was room with me; anybody else and he would have been in the fence by now,” Pagenaud added when told that Newgarden thought there had been room to make the move.

Meanwhile, Castroneves had to hold off Daly to claim fourth position at the end of a race in which he was in a comfortable winning position.

Kimball had been in the thick of things with both Foyt cars around the back end of the second hundred laps.

He was cleared of wrongdoing when he made sure there was no way that Daly would pass him up the back straight on Lap 181, before a major dive up the inside of Carlos Muñoz for what became eighth as Hunter-Reay slapped the wall.

The top 10 was rounded out by James Hinchcliffe (Schmidt Peterson Honda), Muñoz, and Sebastien Bourdais (Dale Coyne Honda) on the latter’s return from injury.

Newgarden has extended his series lead over Dixon, while fifth-placed Power is now a longshot for the title with just two races remaining in the 2017 Verizon IndyCar Series.

The next of those in a week’s time at Watkins Glen (September 1-3).