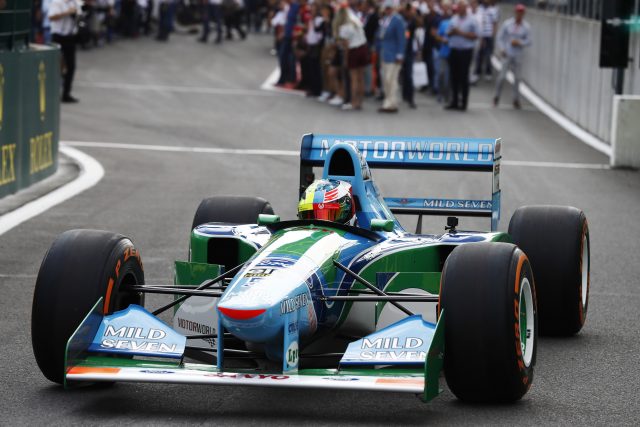 Mick Schumacher said he was “amazed” by the opportunity to drive his seven-time Formula 1 world champion father Michael’s title-winning Benetton ahead of the Belgian Grand Prix.

European Formula 3 Championship podium finisher Mick drove one lap of Spa in the Benetton B194, in which his father won eight races on the way to his first world championship crown.

Schumacher wore a special helmet that incorporated his usual design on one side and half of Michael’s original design on the other.

The run was organised to commemorate Schumacher Sr’s 1992 Belgian GP win, his first in F1.

He also described the experience to BBC 5 Live as “an absolute pleasure. I was so happy to do it.

“It was emotional. There is a lot of history here and for my father.”

The Spa-Francorchamps circuit is synonymous with Schumacher’s F1 career.

He made his grand prix debut at the track in 1991 for Jordan, qualifying seventh but retiring with a clutch failure.

One year later Schumacher took the first of his record 91 victories at Spa, beating Nigel Mansell through a combination of strategy and the Williams developing a misfire.

Another Schumacher landmark, his record number of 68 pole positions, was matched by Lewis Hamilton in qualifying for Sunday’s grand prix.

Commenting on his father’s pole record, Schumacher added: “I always look back at my dad’s career but records are there to be broken so well done to Lewis Hamilton.”