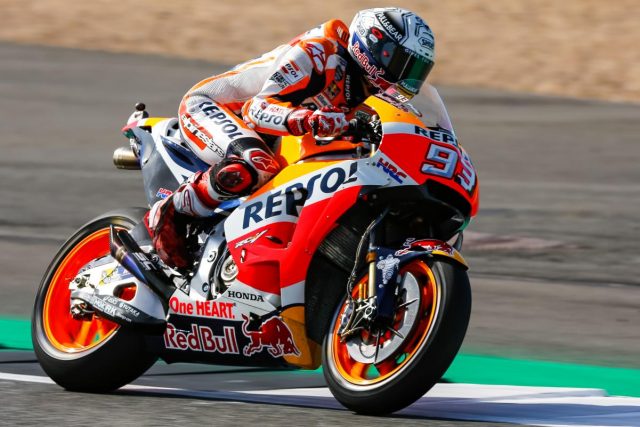 Marc Marquez has broken the Silverstone track record as he scored pole for the British Grand Prix.

The Repsol Honda rider will line up on the front row alongside Valentino Rossi and Cal Crutchlow, who also helped to light up the timing screen in the latter moments of Q2.

Marquez had already broken the qualifying record on his first flyer when he nearly dropped his bike while on track to go faster again the next time around.

However, on his second run the Spaniard became the first man to lap Silverstone in less than two minutes on a motorcycle, securing his fourth consecutive pole position.

“I saw the replays and I said to the team, ‘Turn off the TV,’ because I don’t want to see, I just want to keep pushing,” laughed Marquez about watching his near-crash while waiting in the pits between runs.

“(I’m) happy because here it is so difficult to make the perfect lap but I was able to be fast and be constant.”

Rossi (Movistar Yamaha) looked like knocking Marquez off pole position when he went much faster to the second sector but lost time in the latter half of the lap and placed second.

Crutchlow also started his second run with a sector time faster than Marquez’s best in the first runs, before clocking the third-fastest lap on his LCR Honda.

Jonas Folger (Tech 3 Yamaha) also had to ride in both parts of qualifying as he qualified 10th.

He will share Row 4 with Pol Espargaro (Red Bull KTM), who suffered a frightening crash at Brooklands but was later seen walking down pit lane, and Scott Redding (Pramac Ducati).

Race start is the later time of Monday morning at 0030 AEST.