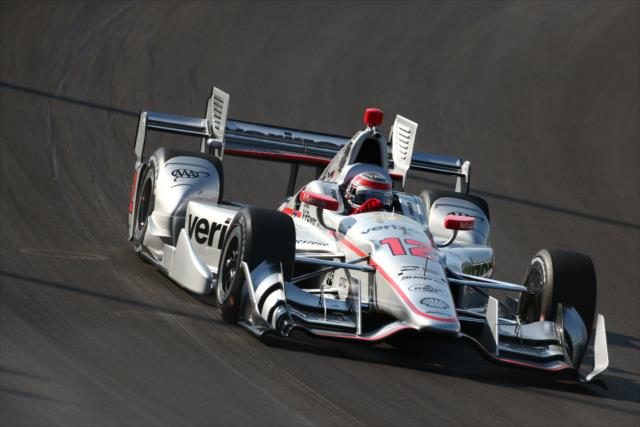 Will Power will head up an all-Team Penske top four for the start of the Gateway IndyCar race after a blistering pair of laps yielded his 50th career pole.

Power will share the front row with series leader Josef Newgarden, with Row 2 the other two Penske Chevrolets of Helio Castroneves and Simon Pagenaud.

Pagenaud, fifth on track, was the first to make a major impression in his two-lap qualifying run, lapping over an average 186mph on his first lap and 187mph on his second for a new track record.

Fastest prior to the Frenchman had been JR Hildebrand (Ed Carpenter Racing Chevrolet) with a two-lap average of 182.499mph.

From there, only Penske drivers would lead the session.

Castroneves was the 13th car out and already averaging over 185mph on his warm-up lap before he clocked two laps each above 187mph to go fastest.

Newgarden came out three cars later and set two laps over an average speed of 188mph to take over provisional pole.

The pole is his sixth of the season and 50th in the Verizon IndyCar Series.

“That’s a number that I don’t think I would have dreamed of reaching when I started my IndyCar career,” said the 36-year-old.

“Obviously driving for Penske’s definitely a big part of that and you’re given great cars week in, week out, so I’m very happy to get the Verizon (No.) 12 car on pole here at Gateway.”

Takuma Sato was the fastest Honda driver in sixth for Andretti Autosport, one position ahead of Scott Dixon’s Chip Ganassi Honda.