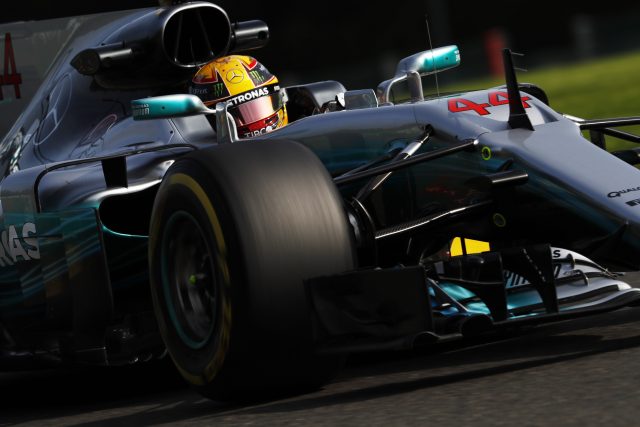 Lewis Hamilton emerged as the man to beat after topping practice for the Belgian Grand Prix at the famous Spa-Francorchamps Circuit.

The three-time world champion, equipped with an upgraded Mercedes power unit, clocked a 1:44.753s effort in Practice 2 before a rain shower doused the track with 25 minutes remaining.

Mercedes’ Valtteri Bottas was third fastest having briefly lit up the timing screens after becoming the first of the front runners to log a time on the ultra-soft rubber.

Daniel Ricciardo could only manage the sixth fastest time with the Australian 0.8s shy of his team-mate Verstappen.

The Azerbaijan Grand Prix winner missed a large chunk of the session after he encountered an issue with his Red Bull in the early running.

Ricciardo, along with McLaren’s Fernando Alonso, braved the wet conditions late in the session, before the intensity of the rain shower forced them back to the pits.

Nico Hulkenberg was the top Renault runner in seventh ahead of Force India’s Esteban Ocon.

The top 10 was completed by Toro Rosso’s Carlos Sainz and Renault’s Jolyon Palmer.

Alonso, running an upgraded Honda engine, was 11th in front of the sister Force India of Sergio Perez.

Meanwhile, Perez was involved in an unusual incident with Haas F1’s Kevin Magnussen, who appeared to intentionally block the Mexican at Turn 9.

Only 19 cars took part in Practice 2 after Williams’ Felipe Massa suffered a heavy crash at Turn 7 (Malmedy) in first practice, which necessitated a chassis change.