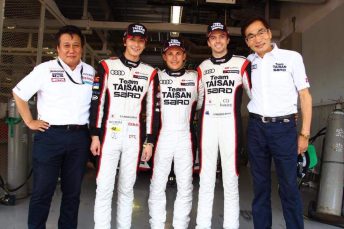 Australian Jake Parsons is relishing the chance to compete this weekend in the famous Suzuka 1000km race.

Adding to the excitement of participating in the Super GT championship’s flagship race, Parsons will do so with former Formula 1 driver Christian Klien as co-driver.

However, with Suzuka representing the longest race on the calendar by far, the team has opted to add Klien to its roster for the weekend.

Furthermore, Parsons will drive against Jenson Button, who will make his Super GT debut in a GT500 class Honda NSX.

“It’s such a prestigious event, attracting drivers from around the world, including Jenson Button.

“It’s going to be an amazing feeling, lining up on the grid alongside the 2009 Formula 1 champion.”

The race also represents Parsons’ first at the famous figure-eight circuit in Japan, adding to the sense of anticipation for the Melburnian.

“Suzuka has so much to offer, it’s the full package,” he exclaimed.

The 22-year-old will draw on experience gained in February’s Bathurst 12 Hour, his first endurance race, but that piecing the whole race together would nevertheless be a challenge for the team.

“I think team strategy is going to be crucial here, with so much more to co-ordinate, especially as we have to make a minimum of five pitstops during the race,” explained Parsons.

“Our tyre choice, race strategies and driver changes will be important to get right, but we’re all preparing and working hard together to get the best result.”

The Team TOM Lexus LC500 which Cassidy shares with Ryo Hirakawa in GT500 class will, however, be carrying less in the way of success handicaps due to a recent run of non-podium finishes.

The Suzuka 1000km weekend starts with practice and qualifying on Saturday August 26, and the race from Sunday at 1330 AEST.

Speedcafe.com will carry a live stream of Sunday’s race.