Tekno Autosports driver Will Davison remains hopeful his Supercars plans for next season will soon be secured.

The reigning Bathurst 1000 winner is in the final season of a two-year contract at the Queensland operation, having joined the team at the start of 2016, following spells at Erebus Motorsport, Prodrive, Walkinshaw Racing and Dick Johnson Racing.

Davison, who finished fifth in the championship standings last year, is among a group of current main game drivers out of contract at the end of the season.

The 34-year-old is keen to strike a new deal with his current employers but says he is waiting on the team to secure its budgets for next season.

Talks have begun between the two parties with Davison stressing that he will see where discussions lead before investigating the possibility of a move elsewhere.

While this year’s campaign has provided a tougher challenge, he is convinced by the potential of the team, which has moved into a new state-of-the-art workshop.

“We are still unsure, we have no plans at all for next year at this stage,” Davison told Speedcafe.com.

“There is nothing to report but I’m pretty keen to get it sorted out.

“There has been little bit of talking with these guys (at Tekno) but there is a lot of uncertainty, but hopefully we will know more soon.

“It is hard to know at the moment (if there are any options outside of Tekno) but I have got to speak with these guys first.

“There are always potential opportunities but nothing clear cut and I have only spoken to the Tekno guys at this stage. That is the priority at the moment and work out what their plans are going forward.

“A lot of things have to line up but I love the crew here. 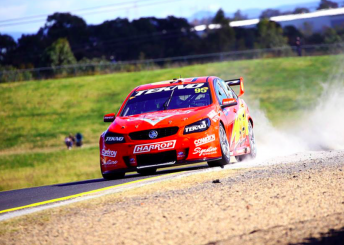 “It has been tough at times at this year and I like the team and the potential and I think continuity is important, but a lot of things need to happen for it to continue forward.

“It’s just trying to get budgets in place from what I believe, which is out of my control.”

Meanwhile, Davison endured a challenging weekend at the Red Rooster Sydney Super Sprint but was able to recover to a pair of 12th place finishes behind the wheel of his Lightning McQueen liveried Commodore.

Contact from James Courtney and Jason Bright forced him into a spin at Turn 1 on the opening lap of Race 17, while a grid penalty for impeding his brother Alex Davison in qualifying saw him fight back from 21st on the grid in Race 18.

Davison has struggled for consistency this season leaving him 16th in the standings with six top 10 finishes.

Although frustrated by recent results, he feels the car is just operating narrowly outside the sweet spot.

“We are teetering around the edges which is what we have been doing a lot this year,” he added.

“It is a bit frustrating as we are not quite hitting the sweet spot when it counts.

“We are not nailing when we need to in qualifying. It is very fine margins but it is really frustrating because at times we have got speed.”

Davison will now regroup ahead of the Wilson Security Sandown 500 from September 15-17, although the identity of his co-driver is yet to be confirmed.

Team owner Jonathon Webb, who teamed up with Davison for the Pirtek Enduro Cup last year, is yet to commit to the drive.