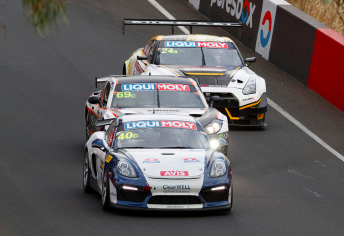 The operation will field two Porsche Cayman GT4s in February’s Mount Panorama endurance race after a successful debut at the event this year.

Brookspeed finished second and third in the GT4 class with the #40 car of Aaron Mason, David Drinkwater and Adrian Watt finishing as the class runner-up and 24th outright.

The GT4 class was won by German team ProSport Performance in their Cayman GT4.

“They will be heading to Bathurst after the COTA 24 (Circuit of the Americas 24 Hour race) and Dubai 24.

“The two cars covered 42,000 kilometres in the container last year, going from the UK to Abu Dhabi, then to Bathurst, Misano and back to the UK.

“We don’t have drivers confirmed and will probably be looking for a full line up of six drivers, three drivers per car.”

Event organisers are expecting the GT4 class to grow next year following a global boom which the category is currently enjoying.

The grid could include BMW next year with BMW Team SRM keen to field a new M4 GT4 alongside its M6 GT3.

“The BMW M4 GT4 made its racing debut at the Dubai 24 Hour race earlier this year and there are plans for a full customer racing program in 2018.

“With the growth of GT4 around the world we’re working with BMW to make sure the car is in Australia, and racing it at Bathurst would be the ideal place to showcase the car, so that’s what we are working towards.”