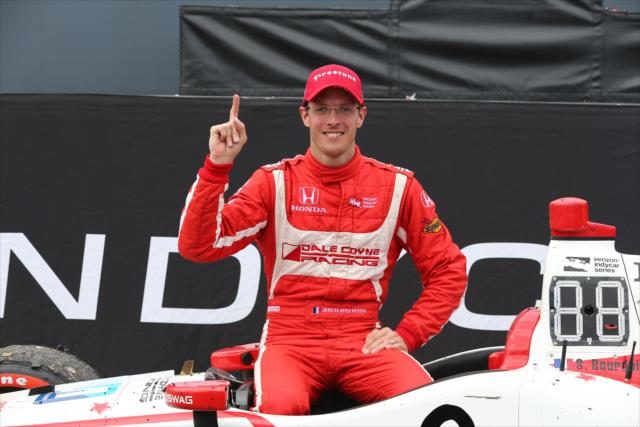 Sebastien Bourdais after his win in St Petersburg

Sebastien Bourdais will make a remarkable return to IndyCar racing in this weekend’s Gateway race, less than 14 weeks after being hospitalised as a result of his huge Indianapolis crash.

Substitute driver Esteban Gutierrez will give up his seat in the #18 Dale Coyne Racing Honda for Bourdais, who was initially thought to be out for the season due to hip and pelvic fractures sustained in qualifying for the Indianapolis 500.

However, the Frenchman drove an IndyCar in testing at Mid-Ohio on July 31 before IndyCar medical director Dr Geoffrey Billows gave him clearance to race on August 16.

Bourdais had initially ruled himself out of the back-to-back oval races last weekend at Pocono and this weekend at Gateway due to DCR’s shortage of cars.

“You have no idea how excited I am to be getting back in the car this weekend and for the remainder of the season,” said Bourdais.

“It’s been a long 14 weeks and I’ve worked very hard to get to this point.

“Following the crash, I had one goal in mind and that was to be back for Sonoma (final race of the season), and here I am getting back in the car with three races to go.

“It’s a bit unbelievable but I can’t wait to try out that new surface at Gateway this weekend.”

Meanwhile, Gutierrez hopes that his performance filling in for the man who won the first race of the season will parlay into a full-time drive in 2018.

“It’s been a very interesting few months for me getting to race in the Verizon IndyCar Series on the street circuits, road courses and especially ovals,” said the Mexican.

“I want to thank the team and Dale Coyne for giving me this opportunity to gain this experience in view of a full-time program in the Verizon IndyCar Series next year.

“My goal was to learn as much as possible in order to be ready for 2018, where a new car will be introduced.

“This experience with the team will pay dividends next season.”

Gutierrez recorded a best result of 13th, at Iowa Speedway, in his seven races.

The Verizon IndyCar Series continues this weekend with the third-last race of the season, the Bommarito Automotive Group 500 at Gateway Motorsports Park, on August 25-26.