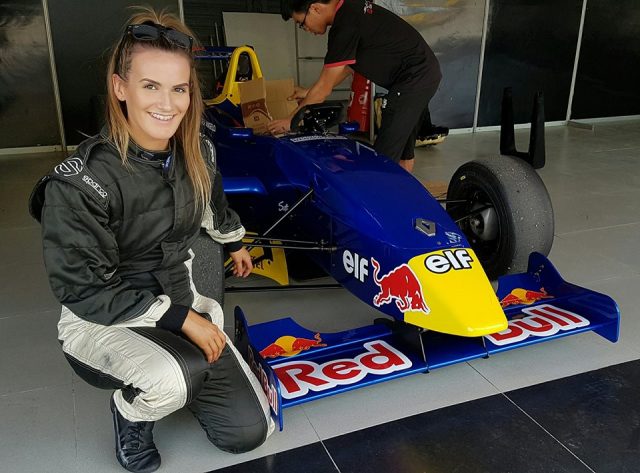 Angelo with the Formula Renault in Zhuhai

Chelsea Angelo is keeping her career options open after a successful Formula Renault test in China.

While declaring the test a success, the Melbourne driver reiterated her earlier comments to Speedcafe.com that her most likely move would be into Porsche GT3 Cup Challenge in 2018.

“Our main idea to go over there was to meet the team owners and also make a good first impression, so hopefully it might get their minds ticking a bit,” Angelo told Speedcafe.com.

“It’s all just a bit of talk at the moment, but we are keeping our options open to see if anything is available for overseas.

“Like I said before, we’re looking at possibly doing the GT3 Cup in a Porsche as well, so we’ve got a couple of options here.

“At least we’ve done something overseas and we might have a bit of a link over there, but at this stage it’s still up in the air at the moment.”

Angelo nevertheless spoke glowingly of the experience, during which she completed three half-hour sessions on each day under the tutelage of compatriot and 2016 Asian Formula Renault Series champion Josh Burdon.

“It was really, really successful,” she said.

“The team were quite impressed with how my performance was, I got comfortable being back in an open-wheeler again, which is really good to see,” Angelo added, having not raced an open-wheeler since finishing second in the National Class in the 2014 Australian Formula 3 Championship.

The 21-year-old also revealed that she beat a target lap time set by Burdon, who drove with BlackArts in his successful AFRS campaign.

“He was pretty much coaching me for the whole two days, and he got in the car on Wednesday and set a target lap time,” she explained.

“My target was to try and get as close to the lap time as I could, but I got better than that lap time, which is pretty cool to see.”