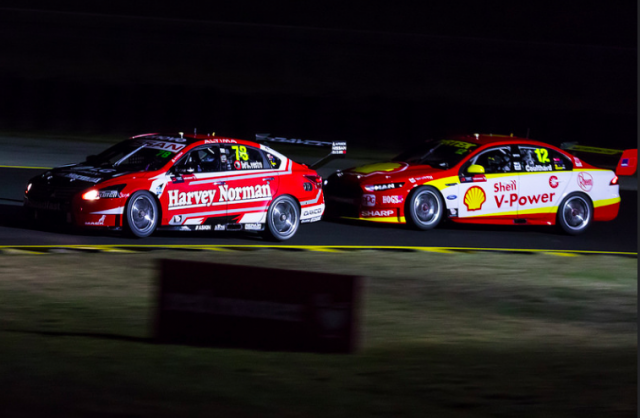 Ascertaining the costs to light up Sydney Motorsport Park is the next stage of a plan to host a Supercars night race next year.

The championship held a lighting test at the Western Sydney venue last week to understand the equipment and infrastructure required to put on a night race, which will be a first for the category since Calder Park in 1997.

A night race is part of Supercars’ plan to showcase a quick-fire event next season which could secure a midweek slot on the 2018 calendar.

Temporary lighting was set up at Turn 2 last Thursday night before being moved corner by corner around the circuit.

The conditions were tested by DJR Team Penske’s Fabian Coulthard and Nissan Motorsport’s Simona de Silvestro, while television cameras captured the test to establish if the vision met broadcast standards.

Supercars CEO James Warburton says the test has provided valuable information to push the project forward, although a second lighting test has not been ruled out.

Securing the correct lighting system at the right cost remains is the next hurdle before the project receives the green light.

“I think it proved the concept in terms of the media and the reaction to it,” Warburton told Speedcafe.com.

“People really want to see it and we had great feedback from Fabian (Coulthard) and Simona (de Silvestro) and the vibe from the teams was good.

“We absolutely 100 percent want to do it and now it is really a matter of costing out the right lighting structure.

“We are committed to it and we want to do it.

“The Supercars Commission has approved the format to an extent with the event being part of the championship. Now we have just got to make it a reality.

“The quality of the broadcast was good enough in the sweet spot of the corner.

“It is never going to be daylight or be the quality of a Singapore Grand Prix or Abu Dhabi, but it needs to be at a decent level.

“We can’t rule it (another test) out but I would say we are pretty close in what we need to do.”

Warburton has also confirmed that the proposed night race will be held on the 3.93km Sydney Motorsport Park layout, rubbishing talk that the shorter north circuit will be used.

The shorter configuration, which hosted a night race in 1996, was utilised during the lighting test, but was deemed too short by the drivers.

While race formats and date slots are yet to be confirmed, Speedcafe.com understands the Supercars Commission has voted in favour of a race similar to that held on Sundays at Super Sprint rounds.