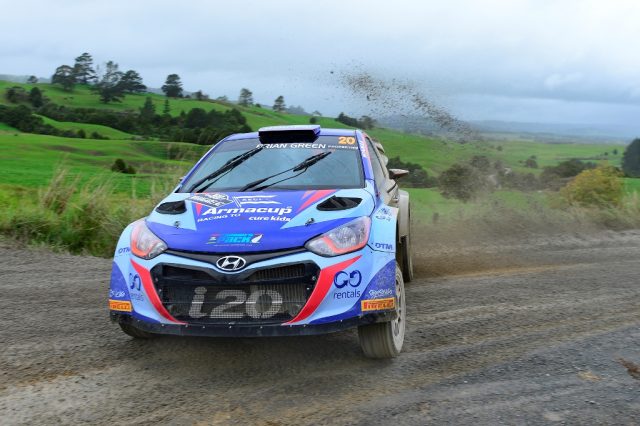 The i20 which Paddon will pilot in Coromandel

Hayden Paddon will make a first start of the year in the New Zealand Rally Championship when he debuts in the Coromandel Rally this weekend.

Paddon has returned home off the back of Rallye Deutschland, in which he finished eighth, to join former World Rally Championship co-driver John Kennard for the Whitianga-based event.

Kennard finished up his WRC duties with Paddon at Rally Argentina in April.

“New Zealand is the best place to rally in the world,” said Paddon.

“I’ve never done this rally or these stages before, so it will be a new experience.

“It looks like a sunny, cold week, so will be a perfect weekend for rallying.

“I’m really looking forward the whole event; it will be great to get back in the car with John again, and enjoy the relaxed atmosphere, the driving, and the good people in our fantastic New Zealand rally community.”

The drive will be Paddon’s first in the Hyundai NZ i20 AP4 rally car this year, and thus his first with the team under the management of the family Paddon Rallysport operation, after David Holder and Job Quantock ran in the car during the first three rounds of the season.

“We have big plans for where we want to take Paddon Rallysport in the future and this is all just the start.

“Hyundai New Zealand is a crucial and much valued part of the program and they continue to support us and rally sport both here in New Zealand and internationally.”