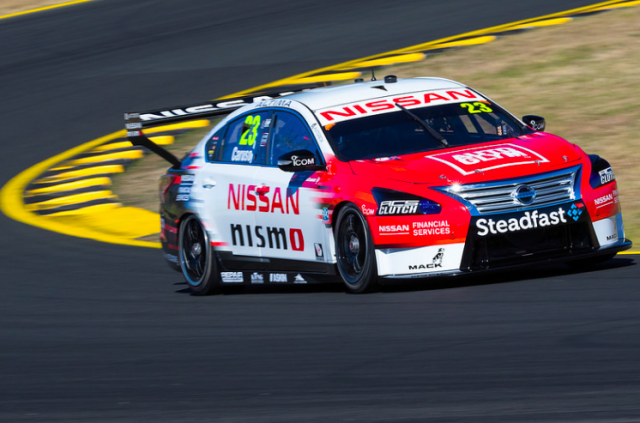 Michael Caruso is hoping a return to form at the Red Rooster Sydney Super Sprint will be the catalyst for a strong end to what has been a challenging season.

The Nissan Motorsport driver has struggled for consistent pace and results this year having headed into Sydney Motorsport Park with two top 10 finishes.

This statistic was doubled last weekend as Caruso emerged as genuine top 10 contender which he translated into sixth and seventh place results.

Nissan has been unable to replicate form it showed last year across its four cars with Rick Kelly currently the top Altima driver sitting 14th in the championship.

The operation’s development has also been hampered after losing a test day due to a rule breach earlier in the year.

Caruso led the Nissan charge last year by winning a race at Darwin alongside regular finishes inside the top 10.

Twelve months ago the 34-year-old was ninth in the standings 499 points better off than his current 17th position.

After a frustrating few rounds, Sydney’s results have given Caruso a much needed boost that he hopes will continue for the remainder of the campaign.

The two-time Supercars race winner believes a set-up path taken on his #23 Altima at Tasmania is now starting to bear fruit.

“I’m happy that we’ve now seen a little bit of light at the end of the tunnel,” Caruso told Speedcafe.com.

“We knew that was going to come but obviously not just for myself, more for the 60 odd people that we employ.

“It’s great that they can see that the persistence and the progression in our setup is getting close to where we want to be.

“Ultimately I think one of the boys just shouted out to me before that we’re only 200 points off 10th.

“It is much more positive. We’ve seen in the past two events, I’ve qualified okay but other than Townsville I haven’t been able to race where I’ve qualified.

“It is definitely good that we’re moving forward in the races rather than moving backwards.”

With 900 points up for grabs at the upcoming Pirtek Enduro Cup, Caruso remains confident there is plenty of time to turn his season around.

However, he admits next month’s Wilson Security Sandown 500 will provide a challenge given the Altima’s engine package compared to its rivals.

“We just need to now work in this, particularly next three races, we know how this can really turn your year around, so hopefully it’s the one that can turn our year around,” he added.

“Now we go to a circuit that is completely different.

“It is probably a similar grip level but I guess the style of circuit is a lot different.

“The enduros is one thing, so the race itself is going to be different, but our speed hopefully will be there. It’s always difficult for us with Sandown.

“We know our engine package isn’t the strongest, so we’ll see how we go.”

Caruso will once again team up with Dean Fiore for the Pirtek Enduro Cup, which begins from September 15-17.