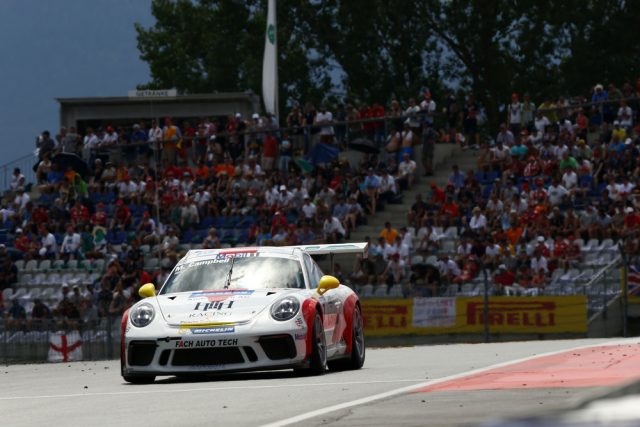 Matt Campbell hopes that a return to the relatively familiar confines of Spa-Francorchamps this weekend will help him recover ground in the Porsche Mobil 1 Supercup standings.

However, he followed that result up with a frustrating seventh in Britain, and a non-points finish in Hungary when he struck clutch issues on the warm-up lap.

The struggles saw him drop from third to fourth in the title race, and his gap to the championship lead rise from 18 after Austria to 47 at present.

However, having already driven the 911 GT3 Cup car around Spa in testing, Campbell is hopeful of a return to the sharp end of the field in this weekend’s double-header at the Belgian circuit.

“It’s been a few weeks outside the car so I’m eager to jump back in this weekend and hopefully bounce back after a couple of difficult rounds,” said Campbell.

“I tested at Spa twice earlier in the year which, in fact, was the location of my first ever test in Europe.

“I really enjoyed the circuit and felt quite comfortable there so I’m hopeful of a strong result there this weekend.

“I’ve dropped down the order from third to fourth at the last round after a couple of poor results so I hope to get some strong results before the big break between Monza (Round 9) and the season finale in Mexico (Rounds 10 and 11).”

Campbell is also representing Australia in the Supercup Nations League, in which drivers earn points for their country.

The Queenslander’s efforts have Australia fourth in the standings, behind Germany, Norway, and Great Britain, a position which Campbell hopes to improve.

“It would be great to move Australia up in the Nations League standings,” he added.

“It certainly adds a special element to the series, racing for your country, especially with so many different countries represented in the series.

“You usually represent your team and supporters so it’s nice having an added element to the series where I can represent Australia.