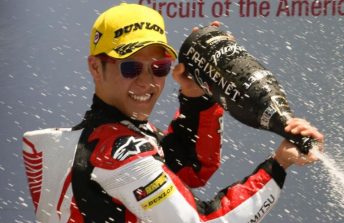 Takaaki Nakagami celebrates a podium in America in 2017

The LCR Honda team will return to a two-bike operation in next year’s MotoGP World Championship with the announcement of Takaaki Nakagami’s graduation to the premier class.

Nakagami will join Cal Crutchlow at the satellite Honda outfit, which has run as a one-bike team since it joined MotoGP in 2006, with the exception of 2015 when it fielded both Crutchlow and Jack Miller.

Crutchlow had recently expressed his frustration at running as a lone ranger for the Lucio Cecchinello team.

Nakagami is currently into his sixth full season in Moto2, taking three of his 13 career podiums in the intermediate class this year.

“Since riding a pocket bike when I was four years old, I have always aimed to compete with the world’s best,” said Nakagami.

“This opportunity has become real thanks to all of my associates and fans.

“There are still seven Moto2 races left this season, including the Japanese Grand Prix. I’ll be concentrating on these races, while gaining the abilities I need for next year.”

LCR’s expansion fills the 24th and final slot on the MotoGP grid, which was reserved for the team’s return to two bikes.