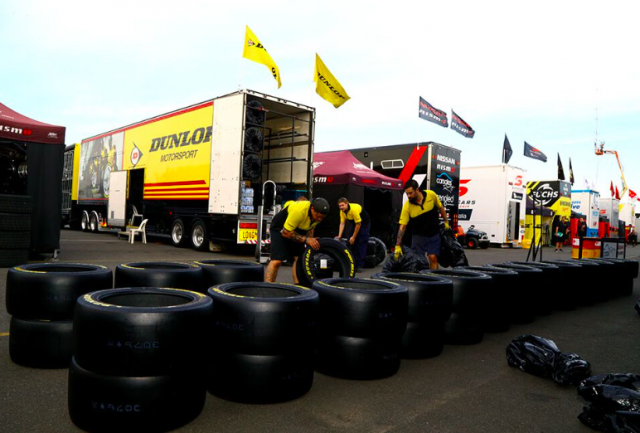 Dunlop is gearing up to test three new specifications of tyre at Phillip Island next month to evaluate possible changes to the rubber for 2018.

The Supercars control tyre supplier has locked in a test from September 4-5 at the Victorian venue to gather valuable feedback to improve next year’s soft compound tyres.

The test follows a series of failures with this year’s new construction of tyre particularly at high loading circuits such as Phillip Island.

All three manufacturers will be represented with the development running to be carried out by Scott McLaughlin (DJR Team Penske), Garth Tander (Garry Rogers Motorsport) and Michael Caruso (Nissan Motorsport).

Dunlop plans to test a selection of tyres, including the 2016 and 2017 specification rubber, to provide a wide range of data.

These will be compared against the three newly developed designs for 2018.

The new specifications feature changes in the material used while the compounds and construction remain the same as the current tyre.

“Testing is still going on in Japan at the moment. If the test is successful we will run those tyres at Phillip Island and do race distances on them,” Dunlop Australia boss Kevin Fitzsimons told Speedcafe.com.

“We should be able to get some useful data and touch wood the weather gods will be kind to us.

“We have got two days booked and hopefully we can knock it off in one.

“We have three good guys to run with so I’m looking forward to the feedback.

“The compounds are exactly the same, the construction is the same, but there is different material (in the make up).

“Two of the specs are a different shape, more like the 2016 tyre which had a curved sidewall to sidewall.

“We are just trying to put some flexibility in the joint so if they (the teams) are upping the camber then it spreads the load and the temperature over a bigger area, and gives us a bigger working window.”

Tyres continued to be a talking point on Sunday after the Erebus Motorsport duo of Dale Wood and David Reynolds, and Nissan Motorsport’s Rick Kelly suffered failures.

An explosive blow-out for Kelly prompted a Safety Car to clean up sections of his Altima’s bodywork that were strewn across the track.

Fitzsimons believes the issues were caused by drivers running the over the back of the sharp exit kerbs at Sydney Motorsport Park.

This week should see the arrival of a new batch of the 2016 specification tyres for use at the Supercheap Auto Bathurst 1000 and Pukekohe events.