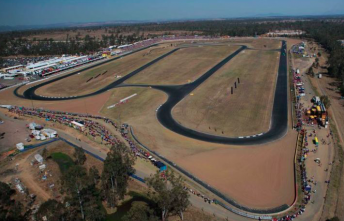 Two people have died in a crash during an event at Queensland Raceway.

A report by the Courier Mail claims a car left track at the Ipswich circuit before it collided with a wall.

Emergency services were called to the scene at 8:40pm on Saturday night.

Paramedics are understood to have performed CPR on two people who were believed to have been inside the car, before they were pronounced dead.

Speedcafe.com understands an investigation into how the incident unfolded is ongoing.

Further details including the identities of the deceased are yet to be confirmed.

Queensland Raceway was hosting a Roll Racing event from 6-10pm on Saturday night.

UPDATE: Kurt Bull, a 32-year-old from Kawana has been named as the driver of the Holden Monaro involved in the incident while a 41-year-old male was acting as his co-driver in the crash.

Queenland Raceway CEO John Tetley has released a statement on behalf of the circuit highlighting that the car in question impacted the wall at Turn 1 before rolling over and catching fire, having suffered a suspected stuck throttle.

“A highly modified 2004 CV8 Monaro left the track on the entry to Turn 1 at very high speed,” read a statement.

“The following information is only the observations made at the time and need to be treated with some doubt until there are official reports from the QPS Forensic Crash Unit and the Workplace Health and Safety investigations.

“From observations and reports to my staff it would appear the car had a jammed throttle and the brakes were unable to slow the car down before it left the track at Turn 1. Brake lights were clearly seen and there are reports of the rotors glowing in the dark.

“After leaving the track the car powered through to the back wall where it hit the Airfence at an acute angle as the driver tried to get the car around the corner. The car then skidded along the face of the concrete wall until it climbed up the wall and rolled over.

“The car suffered significant damage to the roof and both sides. Both front and rear number plates were undamaged which may be the reason the air bags did not deploy.

“The car rolled back onto its wheels and a fire erupted from the engine compartment probably from oil hitting the exhaust manifolds which quickly spread to the interior of the car.

“Three paramedics were at the car within thirty seconds and both of the occupants were extricated from the car with no burns injuries.

“The fire crew arrived shortly afterwards and discharged 90Kg of Powder and 18Kg of F500 liquid into the engine bay and the interior of the vehicle. This occurred after the driver and passenger had been extricated.

“This is not the place to surmise as to what caused their passing, other than to say the impact was very severe.

“All of the QR crew that were involved will receive counselling to assist them through this horrible event in their lives.

“Likewise our hearts go out to the families and friends of the two men involved – many of whom were at the track to watch the show. What they are suffering today deserves everyone’s respect and condolences.”

VIDEO: A Nine news report on the incident

Meanwhile, the fatalities follow a death at a car club rally in Tasmania following a crash on Saturday afternoon.

The driver lost control of his Mazda RX-7 on Williams Hill Road near Forester.

Despite the efforts of fellow competitors and event coordinators, the 49-year-old driver died at the scene.

The 33-year-old navigator was transferred to Launceston General Hospital with non-life threatening injuries.

The event was cancelled as the scene was attended by crash investigators, who are preparing a report for the coroner.