SUPPORTS: Duckworth cleans up in ARC in Sydney

SUPPORTS: Duckworth cleans up in ARC in Sydney 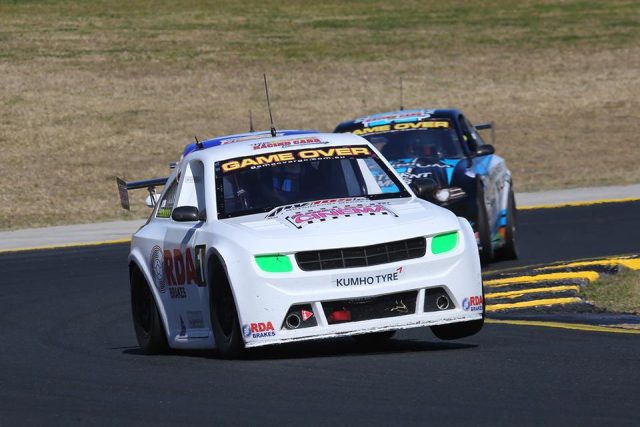 James Duckworth has taken another two race wins and the round win at Sydney Motorsport Park, and in the process moved back into the Aussie Racing Cars series lead.

Duckworth, who won Race 1 the day prior, twice had to come from behind on the final day of Round 5, giving away his pole advantage in Races 2 and 4 to Kel Treseder.

However, in each of those races the RDA Brakes-backed driver found a way back past Treseder before pulling away to victory.

Duckworth, who broke his own lap record on the final lap of the weekend, also climbed from 14th at the start in Race 3’s reverse grid affair to finish that race in second position.

Treseder finished second for the round and was clearly Duckworth’s nearest rival, with Sunday results of second, fourth, and second.

Craig Woods lost the series lead after he spun at the first corner in Race 2 of the weekend and was twice turned around twice in Race 3, the first time by Duckworth in a three-wide squeeze also involving Treseder which was declared a racing incident.

The penultimate round of the series supports the Vodafone Gold Coast 600 on October 20-22. Cameron Hill claimed a clean sweep of race wins at the third round of the Toyota 86 Racing Series with a hat-trick of victories.

Hill was unchallenged at the front across all three races, gradually edging his way clear at the head of proceedings in all three encounters.

Jimmy Vernon improved from third in the first two races of the weekend to take second in the finale ahead of Aaron Seton, who had occupied second in Races 1 and 2.

Vernon was embroiled in a battle with Liam McAdam in the closing laps of Race 2, narrowly holding out to claim the final podium place.

The final race of the weekend saw Hill, Vernon and Seton work their way clear of the pack before Hill opened the gap back to the second place battle in the back-end of the race.

Hill now trails Vernon in the championship by 100 points heading into the fourth round at the Supercheap Auto Bathurst 1000 on October 5-8. A good start proved the decisive factor in the final Formula 4 race of the weekend as Nick Rowe raced to victory and, with it, round honours.

Rowe and Cameron Shields started the final race from the front row tied on points, but a poor start from Shields dropped the Race 2 winner back to fourth.

Though he recovered to second by the flag, Rowe had opened a two-second advantage and managed the lead to the finish.

It was Rowe’s second win of the day, having won Race 2 early in the day from Shields, who climbed from the back of the field following a first lap incident.

As the field attempted to round the opening turn three-wide, Shields found himself squeezed in the middle in an incident that also involved Liam Lawson, Sage Murdoch and Harley Haber.

Rowe now holds a 55-point advantage over Shields heading into the final round of the season at Surfers Paradise as part of the Gold Coast 600.