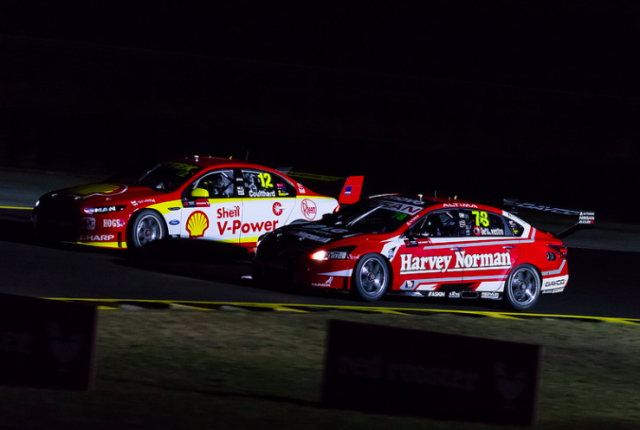 The DJR Team Penske and Nissan Motorsport drivers took part in a lighting test at the Western Sydney circuit which is expected to determine if a night race will be held at the venue next year.

Temporary floodlights were initially installed at Turn 2 with lights set to be moved around the circuit corner by corner during a three hour test.

Driver visibility were among the variables being evaluated while the test was captured by television cameras to ascertain if the lighting is sufficient enough to produce broadcast quality footage.

This is the latest step in bringing night racing back to the Australia’s premier series having last held a night race at Calder Park 20 years ago.

Sydney Motorsport park previously hosted a night race in 1996 using a shorter North circuit configuration of the track, which was utilised in this evening’s test. 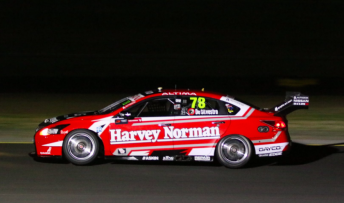 Coulthard and de Silvestro ran for 30 minutes to provide valuable data and feedback which will now be assessed by Supercars.

The remainder of the test was carried out using the category’s Porsche Safety Car driven by Alex Davison.

Coulthard felt the visibility of the areas lit up by floodlights was sufficient but feels improvements could be made to the car’s headlights to aid the drivers.

“It was fun, it was different it is completely new spectacle,” Coulthard told Speedcafe.com.

“It has got potential. I think the areas that we have lit up you see enough.

“It would be nicer if we could have a few less shadows. I think for the purposes of the experiment I think it was definitely worthwhile.

“That is potentially an area that could have a bit of work so they face up the road a little bit further than on the ground.”

The view was echoed by de Silvestro who has previously raced under lights in IndyCar.

The Swiss driver was happy with visibility of key areas of the track including marshal posts, but believes a change of colour to the white brake markers would be an aspect to consider. 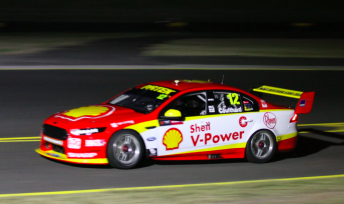 “I think it was cool it is definitely hard because we only have corner,” de Silvestro told Speedcafe.com.

“I thought the lighting was quite good and maybe we could have one more light in the middle of Turn 2. I think it could be fun to race like this.

“You see the dust way more when you are following a car so it as a different aspect, but you get used to it quite quickly.

“The brake markers were a bit hard to see because they are white so with the light they hard to see. I think a different colour would make that ok.

“The placement of the car is a little harder but as a driver you get used to the situation and adapt pretty quickly.”

Supercars is assessing a quick-fire race format for a potential night race next year, while a midweek slot has also been touted.

Coulthard admits he would prefer the championship to arrive at a format which will include pit stops using the 3.93km layout to be used for this weekend’s Sydney Super Sprint.

Speedcafe.com understands the Supercars Commission has shown its support for race akin to the 200km Sunday heat used at Super Sprint events.

“It is up to Supercars what they decide (in terms of format),” Coulthard added.

“As drivers we have tried shorter races in the past and I think fuel stops and strategy make our racing better.

“I think it’s (the North circuit) too short.

“There are some key areas of the track which are good passing opportunities. I think it would be a little bit processional if we were to stick to that short track.

“At the end of the day we want to produce great racing.”

Click here for an extended photo gallery of the night racing test. 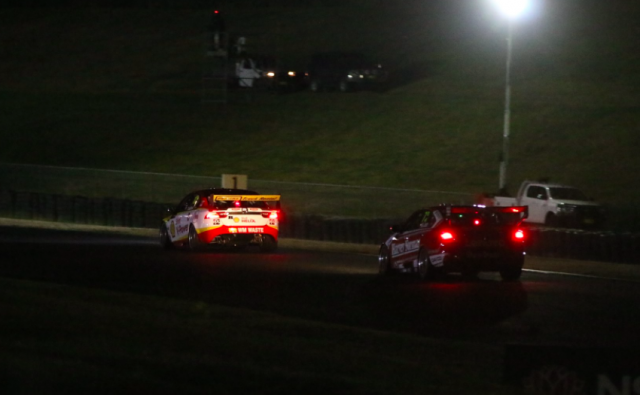