Nine Australian motorsport greats have been honoured at the official unveiling of the Oran Park Town Walk of Fame.

The Walk of Fame, at the site of the former Oran Park circuit in New South Wales, has been formed to recognise the area’s motorsport heritage.

The circuit played a pivotal role in the Australian Touring Car Championship/Supercars from 1971-2008, before the track closed down in 2010 and was redeveloped for housing.

A list of almost 30 drivers and riders has been compiled by Tony Perich and his family, who owned Oran Park Raceway, and led the redevelopment of the facility.

“Here at Oran Park Town we’ve always tried to weave the memories of the circuit into what we’ve done. History is tremendously important to my family. For us, it’s about remembering the cars and remembering the dairy cows too.” said Perich.

“I first came to race at Oran Park on my honeymoon,”added Johnson, who spoke on behalf of the honourees.

“It came a long way from the track it was then to the facility that hosted the Supercars Grand Finale in 2008.”

A small memorial plaque was also unveiled to honour the competitors who lost their lives while competing at the track.

“The memorial plaque doesn’t list names, at the request of some of the families who did not want to see their loved ones named,” Perich added.

“We respected their wishes, but we’ve left room on the memorial in case anyone would like to add something to commemorate a loved one in the future.”

Over the next few years, further stages and names will be added to the Walk of Fame. 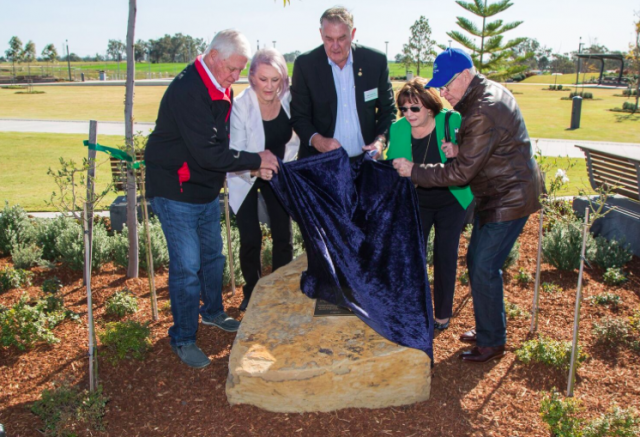