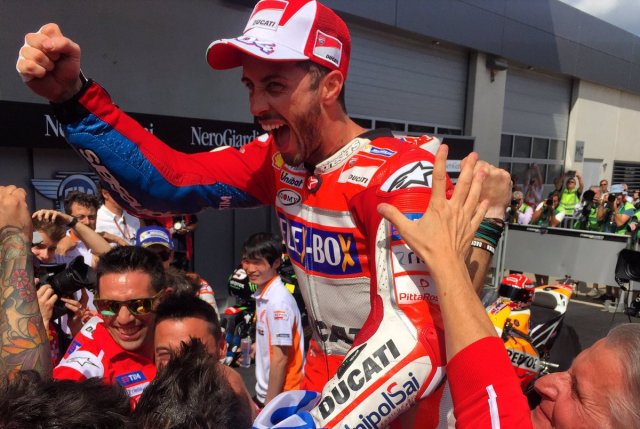 Andrea Dovizioso has taken victory in the Austrian Grand Prix after surviving a desperate last corner dive from Marc Marquez.

Marquez was involved in a race-long arm wrestle with either factory Ducati of Dovizioso or Jorge Lorenzo before an electrifying finish at the Red Bull Ring.

Dani Pedrosa joined his Repsol Honda team-mate Marquez on the podium while Lorenzo finished fourth despite fading in the second half of the 28-lapper.

Marquez got the best launch but lost the lead by the time he got to Turn 3 when Lorenzo blasted past.

Dovizioso ran third, having run too deep at Turn 1 and given up second position to Lorenzo, while Valentino Rossi gained three positions on Lap 1 to move into fourth.

Lorenzo, on a soft rear tyre, pulled a one second lead over Marquez, on a hard rear tyre, on the first lap and enjoyed a comfortable margin until the chasing pack began to close in on Lap 4.

Marquez sat behind before running wide at Turn 3 on Lap 8, giving second position to Dovizioso, but took it back when he snuck up the inside at Turn 7 on Lap 10.

The defending world champion set his sights on Lorenzo again, pressuring #99 into a slight error at Turn 3 on Lap 12 and triggering a frenetic few moments at the front of the field.

Lorenzo moved back across on exit, forcing Marquez to check up slightly as he tried to pass and prompting Dovizioso to make for a three-wide run back down the hill.

Dovizioso took the lead but then went too deep into Turn 4 and Marquez did indeed have first position, ahead of Dovizioso and Lorenzo.

Bikes #93 and #04 dropped the field over the next handful of laps, while Pedrosa moved into a podium position when he got past Lorenzo on Lap 18.

The lead changed again just up the road at Turn 3 when Marquez skated in with too much speed and opened the door for Dovizioso.

While the Honda rider nipped up the inside of the Ducati again at Turn 7 on Lap 20, Dovizioso reclaimed the lead again at Turn 1 on Lap 22 and refused to cede the place two corners later when Marquez tried again.

That prompted Marquez to repeat his Turn 7 move but Dovizoso was right back up the inside at Turn 8, temporarily bringing Pedrosa into contention for victory.

The top two quickly pulled clear again but Dovizioso had to run defensive for the remaining half-dozen laps.

On the final lap, Marquez looked to the outside at Turn 9 then threw his Honda up the inside at Turn 10, the last corner, taking both well wide.

Dovizioso, however, had enough drive to win the final run to the chequered flag and take his third victory of the year, ahead of Marquez and Pedrosa.

It doesn’t get any better than this!

Down to the last lap, last corner, last second… #AustrianGP

“The worst thing you can have in the last lap is Marc behind and I heard in the last corner that he opened (the throttle) earlier than me so I knew he wanted to try,” explained Dovizioso.

“I didn’t brake, I gave the possibility to overtake me, and he was good to stop the bike but I was a little bit faster.

“I’m so happy, it’s very difficult to win like this but it’s really nice; three victories this season, really good.”

Marquez confirmed that he had no intention to play it safe given he leads the championship.

“I tried. (In the) last corner I was completely on the limit,” he laughed.

“But okay, this is MotoGP, this is the show, we try, it was not possible, but next time we will try again.”

Lorenzo fell back towards fifth-placed Johann Zarco (Tech 3 Yamaha), but the finish came soon enough for the Spaniard.

Zarco thus took fifth, having held out Maverick Viñales for the second half of the race.

Behind Viñales was Rossi in seventh, with both Movistar Yamaha riders having lost positions in running wide at Turn 1 earlier in the race.

Alvaro Bautista (Aspar Ducati) was a commendable eighth after only qualifying 17th, with Loris Baz (Avintia Ducati) ninth and wildcard Mika Kallio the best factory Red Bull KTM as he rounded out the top 10.

Jack Miller (Marc VDS Honda) got as high as 12th position having started a lowly 19th, but crashed out on Lap 20 while sitting in 14th.

Marquez’s championship lead has grown by two points to 16, while Dovizioso and Viñales swap positions in the world standing.

In Moto2, Remy Gardner was the final points-paying finisher in 15th, having managed to avoid a first corner mess that took down several riders.

MotoGP now leaves the Continent for Round 12 in Britain on August 25-27.

Championship points: After Round 11