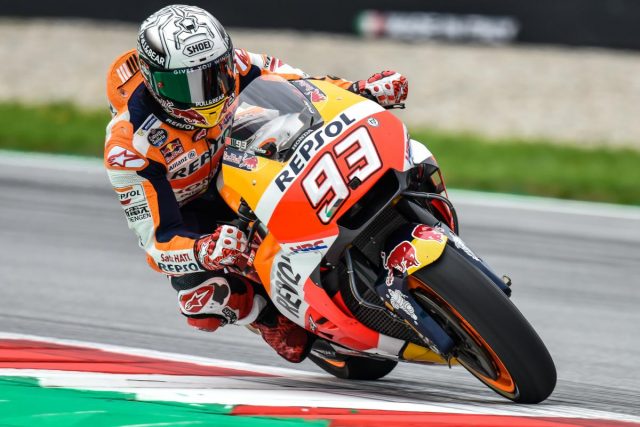 Marc Marquez was all but untouchable as he took a third straight pole position in qualifying for the Austrian Grand Prix.

The Repsol Honda rider will share the front row of the grid with the two factory Ducatis as Andrea Dovizioso rose to second in the last moments of qualifying and Jorge Lorenzo took third.

Marquez aborted his first timed lap in order to prevent Andrea Iannone from following him around the Red Bull Ring before laying down a quick 1:23.473s next time around to go comfortably clear.

The Spaniard went faster again during his second run, setting the ultimate pole time of a 1:23.235s.

Dovizioso surprised by running with a medium compound rear tyre, in contrast to the more popular soft option, and closed in on Marquez’s benchmark after the chequered flag to qualify second on the grid.

Lorenzo helped to somewhat vindicate the Ducati Team’s favouritism for the race, which they won last year courtesy of Iannone, by achieving his second front row start for the Italian squad.

Petrucci jumped up the timing screen after the chequered flag, having had to come through Q1.

The Repsol Honda rider had been in danger of failing to make the cut in the first session of qualifying but Scott Redding couldn’t finish off his final lap.

Lining up with Rossi and Pedrosa on the third row will be Cal Crutchlow (LCR Honda).

Redding was 15th in the end on his Pramac Ducati.

Jack Miller could only qualify 19th in an extremely uncompetitive weekend so far for both he and Marc VDS Honda team-mate Tito Rabat.

Miller has not finished any session higher than 18th, while Rabat qualified 24th and last.

Sam Lowes, whose dumping from the Gresini Aprilia team at the end of the season was confirmed the day earlier, was 23rd fastest.