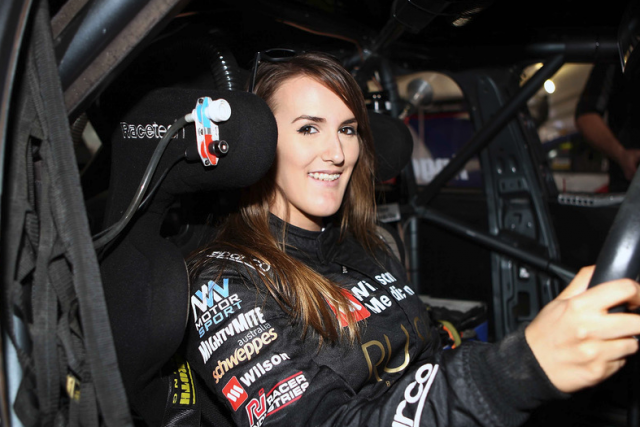 Chelsea Angelo hopes that a surprise call-up to test a Formula Renault in China next week will breathe new life into her ambitions in the sport.

Angelo has not driven a race car since last year’s final Dunlop Super2 Series round at Sydney Olympic Park after an up-and-down season.

The now 21-year-old started the year with Dragon Motor Racing, missed the Townsville round due to budget constraints, then achieved some encouraging results in the final three rounds with MW Motorsport.

Angelo will jet out to China early next week to take up an offer of a test drive with BlackArts Racing at the Zhuhai International Circuit.

The Melbourne native sees the opportunity, her first overseas foray, as an endorsement of her potential and a possible avenue for her career.

“I was contacted by one of the team owners of Black Arts Racing, Bill O’Brien. It was really, really unexpected,” Angelo told Speedcafe.com.

“I got contacted over email and they said that they had a test day coming up in the following week.

“They said that if I was interested, the test and all that is pretty much paid for, so we thought we’d take that as a good opportunity onboard to go over and get some experience doing a test day overseas.

“It’s something I’ve never done before so we’re just kind of keeping our options open and seeing what else is out there in the rest of the world.”

Angelo’s previous open-wheel experience consists of national and Victorian Formula Ford in 2013, before finishing second in the National Class of Australian Formula 3 the following season.

In recent years, she has attempted to break into Super2 on a full-time basis, but has struggled to come up with finances to establish herself in the category.

Now managed by David Reynolds’ manager John Ruggiero, Angelo says that while Supercars remains an ambition, she is entertaining all possibilities including tentative plans to enter Porsche GT3 Cup Challenge.

“I’m quite open to practically jump in anything at this stage,” she explained.

“We think that will be a more of a realistic step to get into, then hopefully after a year in that we would like to hop into Carrera Cup.

“GT3 Cup for us next year is probably more of a realistic budget for us to gather in terms of sponsorship.

“Ideally, I would love to race Supercars one day again, but at this stage it’s just a very high budget unfortunately.

“We thought we might try a different pathway to hopefully get either to Supercars or if there’s an opportunity again overseas, whether it’s GT or whatever it is, at least we have that broader aspect around the world.”

Angelo will take to the wheel of the BlackArts machine for three 30-minute sessions on each of Thursday and Friday next week.