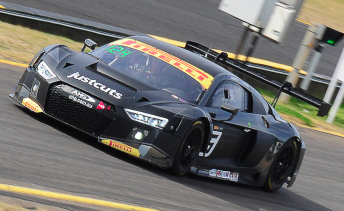 Grant Denyer will return to competitive motorsport at next weekend’s Australian GT Endurance Championship round at Sydney Motorsport Park.

The event marks the television personality’s motorsport comeback after suffering a broken coccyx and finger following a nasty crash in a round of the Australian Tarmac Rally Championship in March.

While the Network 10 host has been ever present in the Australian GT scene in recent years, next weekend’s race will be his first behind the wheel of an Audi R8 GT3.

“It’s always nice to come back; I’m still riding high after last year’s championship victory, to be honest, so hopefully we can have a good shake,” said Denyer.

“Everybody says the Audi’s quite a good car to drive, so once I get my head around the quirks that make it unique, we’ll be sweet.

“There’s a bit of aero around here, that’s good for the Audi. I’m really looking forward to it.

The pair has accrued 10 Australian GT race victories between them across all competitions.

Taylor and Denyer will take to the circuit on Friday (August 18) for opening practice and two qualifying sessions, before the gruelling Sydney Motorsport Park 501 on Saturday (August 19).