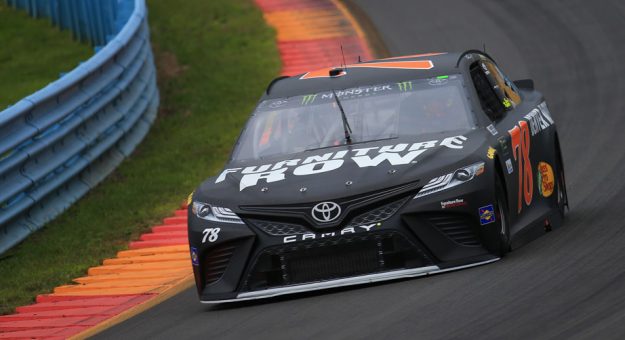 Martin Truex Jr. has taken his fourth win of the NASCAR season as he held off Matt Kenseth by metres in a fuel saving race at Watkins Glen.

Truex crossed the line weaving as he got the all-important fuel that he needed to score the win and break the heart of Kenseth, who is yet to win in 2017.

Over the final period of the race Truex played the fuel game to perfection as he didn’t race guys and dropped his pace to ensure making it through to the finish. With crew chief Cole Pearn and former Supercar engineer Peter Craik calling the shots, Truex followed the plan.

As Brad Keselowski and Ryan Blaney passed him, they would then soon come to pit road, but Kenseth was coming fast, but came up just short.

“I’m kind of speechless really I didn’t think it would play out there,” said Truex.

“But I’m super excited and great to win at this place. You want to win at road courses and we have won at both of them.

“That was so stressful letting guys pass me for the lead.

“I have never had to do that before and I had so much trust in what Cole was telling me what to do. He knew based on our lap times what we had to do.

“This is a big one for our team and really proud of Cole and his perseverance.

Kyle Busch won Stage 1 in dominant fashion. However, a loose wheel during the following round of pit stops meant he had to come back to pit road and started off the back. He would climb back to ninth at the end of Stage 2 which was won by Daniel Suarez.

Busch collided with Brad Keselowski at the ‘Inner Loop’ while battling for eighth after the re-start in the final stage.

Clint Bowyer got into the mix with a fuel only stop, along with Jamie McMurray, which had them pushing Brad Keselowski during the early part of the final stage after a caution outside the pit window. Keselowski had pitted four laps earlier and before the final caution, meaning he was outside the fuel window through to the finish.

He pitted with three laps remaining, while Blaney came to pit road one lap later. From that point Truex did more than enough to take the race.

It was a poor weekend for Dale Earnhardt Jr., who struggled for pace through practice and qualifying before an engine issue ended his race early.