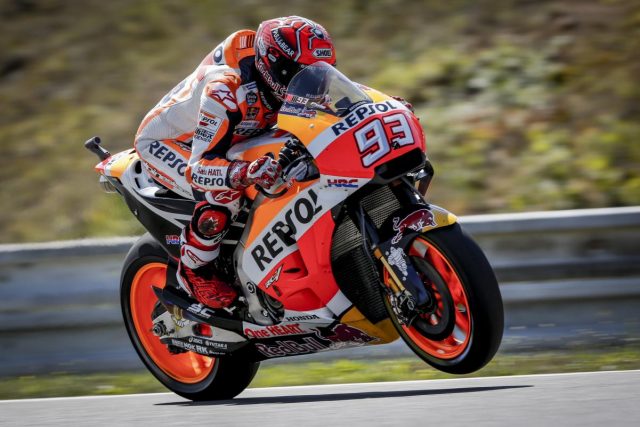 Marc Marquez has taken pole position on MotoGP’s return from the summer break in a committed performance in the Czech Republic.

Marquez twice nearly dropped his Repsol Honda during his first run before setting what would prove to be the pole time, with Valentino Rossi (Movistar Yamaha) and Dani Pedrosa (Repsol Honda) rounding out the front row.

Pedrosa led the way after the first runs, with Marquez just behind despite nearly falling at Turn 3 on his first flyer and Turn 11 on his second.

Championship leader Marquez came out on his second run and set the first 1:54s lap of the weekend, good enough for his fourth pole of the season.

Rossi came within 0.1s of #93 shortly after, while Pedrosa improved after the chequered flag but remained third.

Andrea Dovizioso (Ducati Team) was more than 0.3s off the front row’s pace in fourth.

He will start alongside Cal Crutchlow (LCR Honda), who persevered with a suspected fractured vertebra after a crash during Free Practice 3, and Jorge Lorenzo (Ducati Team).

Lorenzo had been classified third after the first runs but lost the lap time in question due to exceeding track limits at the final corner. 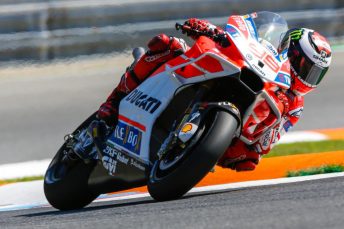 The Spniard ran a bold new ‘aero fairing’ in qualifying after trialling the development in Friday practice.

Jack Miller (Marc VDS Honda) will start from 15th, while Suzuki Ecstar rider Andrea Iannone is only 20th on the grid after crashing one bike in FP4 then experiencing technical problems with the other during Q1.

Sunday’s 22-lap race at the Automotodrom Brno starts at 2200 AEST.

In Moto2, Australia’s Remy Gardner will start from 26th on the grid.