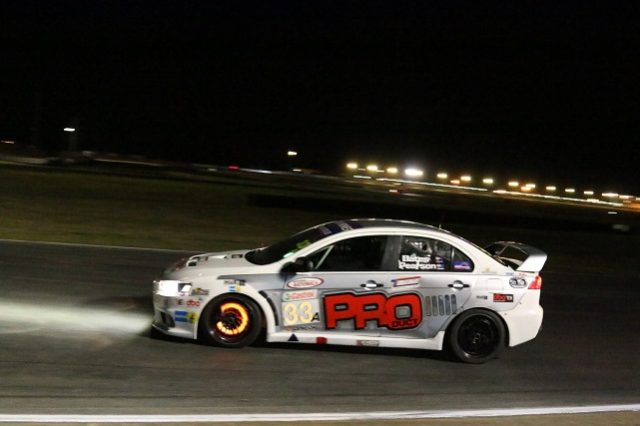 Bob Pearson and Rick Bates have combined to take victory in the Australian Production Cars Fight in the Night at Queensland Raceway thanks to a late-race pass.

Pearson got the jump and led the field away in the #33 Pro Duct Mitsubishi Evo X but the advantage only lasted until the back straight on Lap 1, before Rick Bates finally reclaimed top spot on Lap 91 of 96.

Iain and Grant Sherrin were the race leaders for the other 90 laps (save for the pit stop cycle) in their #18 Sherrin Rentals BMW M4 but placed second when the chequered flag flew, while Chaz Mostert and Nathan Morcom rounded out the podium in the #11 Team DPO Ford Focus RS.

Under late afternoon sun, Pearson made a strong start from the outside of the front row to take the lead, while pole-sitter Iain Sherrin held off Beric Lynton to slot into second position.

The Evo’s lead lasted less than half a lap when Iain Sherrin used the superior straight-line speed at his disposal to blast past, building a margin of more than 42s by the time he pitted at the end of Lap 46.

Pearson ran a lonely second for the rest of the opening stint of the race, which was mostly drama-free for the field, but positions three to five were disputed by the rest of the Class A1 front-runners. Morcom and Rod Salmon waged an early battle over fourth position, which went the way of the former, but Salmon put his #6 Swirk Online Mercedes A45 ahead again on Lap 11.

Salmon then set after Beric Lynton in the #1 Bruce Lynton BMW M1, making the move for third position at Turn 1 on Lap 23.

The top five remained unchanged until Salmon pitted from third on Lap 44, but co-driver Will Brown soon brought the Merc back into the pits with a misfire as they fell out of contention.

After the pit stops, Grant Sherrin took over the lead as car #18 took fuel only, Rick Bates had new front tyres as he assumed second in car #33, and Chaz Mostert rejoined with a net gain of two positions in third as car #11 only took fuel.

Tim Leahey took over car #1 in fourth, while long-time Class A2 leader Karl Begg (#92 MotorSport Life BMW E92 M3) inherited fifth position as a result of the trouble for Salmon/Brown.

The complexion of the race changed on Lap 62 when the Safety Car was called for the stricken #31 Osborne Motorsport Renault Megane RS265 of Calum Jones and Tyler Everingham, the former having to pull off when his fire extinguisher went off inside the cabin.

Mostert’s crew rolled the dice by bringing the Supercars star into pit lane for new tyres, costing car #11 only one position but putting it right up the back of the train.

Grant Sherrin quickly punched out a two second gap when the race restarted on Lap 65, while Mostert closed the gap to Leahey in third.

That wiped out what had become a near three second lead for the Sherrins, and Bates was on the attack upon the final restart on Lap 84.

The two ran in close quarters for a number of laps, the BMW holding a clear advantage on the straights and the Evo faster through the corners.

However, with Sherrin’s car struggling for tyre life, Bates made the move on Lap 91 and eventually took a 2.5s victory. The win was the fifth in a row for co-driver Pearson after he swept the last, four-race round at Sydney Motorsport Park.

Leahey and Mostert twice swapped positions in the final handful of laps, but the former already had a black flag hanging over his head for overlapping at the restart and ultimately finished fourth.

Fifth outright and Class A2 honours went to Begg and Justin Anthony.

Michael Sherrin and Stephen Champion won Class B1 in seventh outright despite also having to serve a PLP for overlapping in their #19 Sherrin Rentals BMW 135i, while Troy Williams and Jeff Nielsen were the only Class B2 runners as they took 13th outright in the #76 TW Motorsport Holden Commodore SSV.

Todd Hazelwood and Scott Turner claimed Class C and eighth outright in the #40 Mainpoint Advisory BMW 130i despite the latter spinning during the opening stint.

Hazelwood had faced a deficit of a full lap to the class leaders but made the decisive pass on Hadrian Morrall (#13 Osborne Motorsport Renault Megane RS265) shortly after the final restart.

Another 300km race will cap off Round 4 tomorrow from 1345 local time/AEST at the Shannons Nationals.