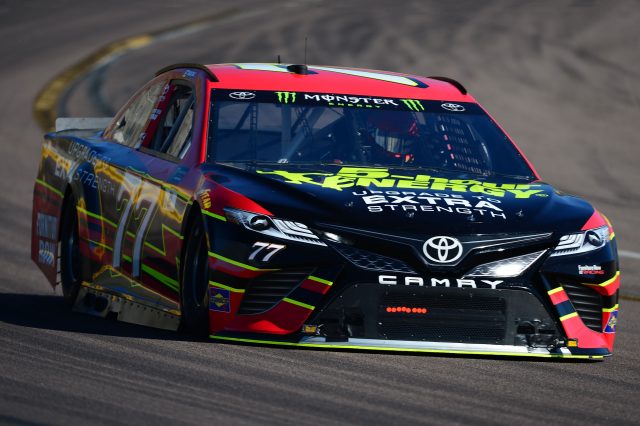 Former Supercars engineer James Small is eagerly anticipating a chance to shine as a NASCAR Cup crew chief for the first time at this weekend’s Watkins Glen 355.

The 34-year-old from Melbourne will step into the coveted role on the #77 Furniture Row Racing entry driven by Erik Jones at Watkins Glen and at next weekend’s Pure Michigan 400.

His Supercars career was highlighted by guiding Mark Winterbottom and Steven Richards to victory in the 2013 Supercheap Auto Bathurst 1000.

Since then Small has enjoyed success in America working for Richard Childress Racing before joining the Furniture Row Racing squad this year, where he is second in command on the #77 Toyota.

The Victorian has been handed a valuable opportunity to impress in a crew chief role this weekend after the #77’s regular Chris Gayle was suspended for two weeks by NASCAR for a technical infringement.

Becoming a NASCAR crew chief has been a long-time goal for Small, who is the son of race car preparer Les Small.

“That is the reason I came over here and hopefully in the future, if I do a decent enough job it will help me at Furniture Row Racing depending on what happens there,” Small told Speedcafe.com.

“It will be a good opportunity, obviously the circumstances in which it has happened is not great. Now into his fourth season in NASCAR’s top tier, the Australian is thoroughly enjoying the experience.

He admits the series has offered plenty of differences compared to Supercars where he cut his teeth.

“It (NASCAR) is very different and it is obviously a lot more intense with the schedule,” he added.

“You sit back in Australia and say ‘it would be great to race 38 times a year’ but then you actually get involved and it is pretty relentless.

“There is so much more resources and money which is probably the biggest difference.”

Looking back on his time in Supercars Small believes that part of his career has provided a valuable grounding for life in NASCAR.

Now well entrenched in America’s top series, he continues to draw on experience gained in Supercars.

Small, who works with former Kelly Racing engineer Peter Craik at the Furniture Row Racing, says he remains in contact with several of his former Supercars colleagues.

While happy in in America, he has not ruled out a return to the category in the future.

“I think Supercars is an incredibly good grounding for any engineer because you get exposed to so many facets,” he said.

“You are not pigeon-holed in any one role. You could be building dampers one week and design parts another, or do failure analysis of a component.

“There are so many facets to that role because (in Australia) we don’t have the resources or the people.

“I think it has helped immensely and I’m lucky to have that.

“Peter (Craik) who I work with is from the same background essentially and he is one of the best people I have worked with in my career.

“I think it makes you more rounded.”

Practice for the Watkins Glen 355 will begin on Saturday night AEST.