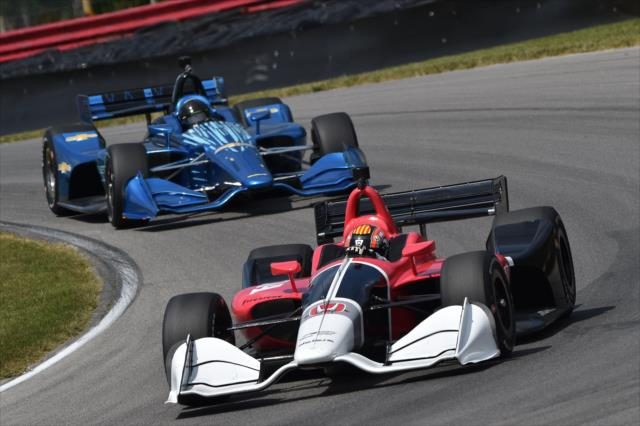 Juan Pablo Montoya believes that IndyCar’s new road course aero kit will cause drivers to ‘get out of shape a lot easier’ as the bodywork made its testing debut.

Montoya and Oriol Servia were again on hand at Mid-Ohio to test the road course/street circuit/short oval aerodynamic configuration, after the superspeedway kit was run for the first time at Indianapolis a week prior.

Montoya, who is driving the Team Penske-supplied Chevrolet for the four separate tests of the new bodywork, believes that the change will enhance the spectacle and bring driver skill to the fore.

“The (new) car is a little more forgiving, but the level of downforce is a lot lighter so you slide around a lot more. That, I think, is good.

“The chances of mistakes are higher, so I think it’s going to bring better racing.”

“It’s harder to see the driver work when you have a lot of downforce (on the current car),” he told IndyCar.com.

“When you have a little less (downforce) and the cars move around, at least the fans can see that we’re doing something.

“Good or bad, we are doing something. I think it’s going to be more fun for the fans and for us.”

The 2005 Champ Car World Series runner-up also expressed a belief that following will be easier from 2018 due to the new kit generating more underside downforce and less downforce from the rear wing and other aero appendages.

Montoya and Servia finished the day taking turns running in front of each other, having started with short runs and then race stint simulations.

“It was great, honestly,” said Servia.

“I’m not just saying it because it’s what we wanted. It really was a lot better than this year’s car.

“Even at Detroit, where the speeds are a lot less, you couldn’t get close to anyone even in the slow corners because there was so much downforce,” he recounted of his last IndyCar start, in June’s Detroit Grand Prix.

“Here, of course there was downforce, but it stays very balanced.

“This year’s car, the rear gets loose. And the new car, you lose a little bit of front, but not much. I was surprised. I think it’s honestly very positive.

The 2017 Verizon IndyCar Series continues with the ABC Supply 500 at Pocono Raceway on August 19-20.

The third of four tests for the 2018 aero kit will be run at Iowa Speedway on August 10.