Iannone: I’m faster than Viñales was on Suzuki

Iannone: I’m faster than Viñales was on Suzuki 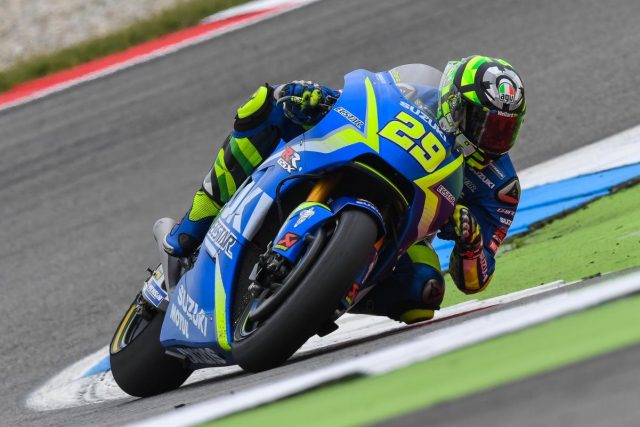 Andrea Iannone has claimed that he is lapping faster on his Suzuki than Maverick Viñales was but that the depth of the MotoGP field has hidden his pace.

Iannone moved across to the factory Suzuki Ecstar team this year when Jorge Lorenzo took his place at the factory Ducati Team, while Viñales moved from Suzuki to fill Lorenzo’s old seat at Movistar Yamaha.

While Viñales has won three races aboard the factory Yamaha and placed first or second in the championship (currently the latter) after every race of the season thus far, Iannone and Suzuki generally have struggled badly.

The Italian is a lowly 16th in the championship with a best result of seventh in Round 3 in the United States while rookie team-mate Alex Rins has just seven points to his name in 22nd after missing four races due to injury.

At the same stage of last season, Viñales was fifth in the standings with 83 points, some 55 more than Iannone has amassed prior to this year’s summer break.

However, Iannone insists that his race pace is superior to Viñales’ of one year prior, with the strength of the 2017 field demoting the blue and yellow bikes down the order.

“I look at Maverick’s data from last year and we don’t ride very different to each other,” Iannone told MotoGP.com.

“Only in the last part of the entry (to the corner), he has the bike straighter and I arrived with more lean angle.

“But I try to adjust, because Maverick didn’t struggle with the front of the Suzuki and I struggle a lot, always.

“More or less in all races I’m faster than him, I improve his lap times from last year, but the result is completely different.

“Because with a better lap time, three or four tenths better, I’m in 10th position, whilst he was in second or fourth.

“So this year is completely different. The level is very, very high.”

The 27-year-old did, however, admit that he and the team had higher expectations for 2017 after a promising winter test, but remains confident that they will move forward through the field.

“It’s a very difficult part of the championship for us, because we expected a completely different situation,” Iannone reflected.

“The first impression with the bike was fantastic. But during the winter we tried to improve some things, some parts. But now we haven’t improved in some areas.

“But I think that step-by-step and with a good focus, me and Suzuki have the same goal, and for sure I believe we will arrive.”

MotoGP returns from its summer break with this weekend’s Czech Grand Prix at Brno, on August 4-6.