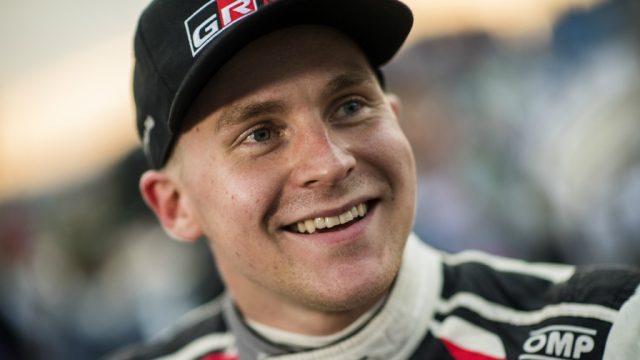 Lappi is the sixth different winner in nine rounds in 2017

Esapekka Lappi has scored a stunning victory at Rally Finland, as the championship contenders all had issues throughout the event.

Lappi who was making just his fourth start in a World Rally Car, took the lead on the opening day and although he dropped behind Toyota team-mate Jari-Matti Latvala on the second leg, he was the class of the field throughout the event.

His position out front was assured after Sebastien Ogier crashed on the opening day, Latvala had electrical failure on the second day, Ott Tanak lost a massive amount of time with puncture on Day 1, and Thierry Neuville could not find the pace in his Hyundai throughout the weekend.

“Amazing, amazing what a rally, but I have to say a big thanks to the team and Tommi (Makinen), they build such a fast car in such a short time,” said Lappi.

“This was on my home soil and I should have been strong here and I was. But we need to practice more on the next events.”

Lappi performance was reminiscent of Toyota team boss Tommi Makinen at the same event in 1994. At that rally Makinen was yet to score a fulltime factory ride and he dominated in a Group A Ford Escort. That result vaulted Makinen into a factory Mitsubishi ride and he scored four-straight world titles from 1996.

“I had a very strong feeling before the rally that Esapekka could do what I did over 20 years ago,” said Makinen.

“I am absolutely happy for the whole team and I think we have a fast car at the moment.”

Lappi had a scare in the previous stage when he went wide and broke a wheel rim, but it couldn’t stop him on the power stage.

Lappi led home Wales’ Elfyn Evans by 36sec who beat another Finn and Toyota driver Juho Hanninen by 0.3sec. Teemu Suninen came into the final day right in the fight for second, but got away with a massive high-speed spinm which saw the front of his Fiesta torn off. He did come home in fourth.

The Power Stage points went the way of Tanak from Evans, Neuville, Latvala and Hanninen.

Neuville’s sixth place and points from the Power Stage now has him tied at the top of the points standings with Ogier.