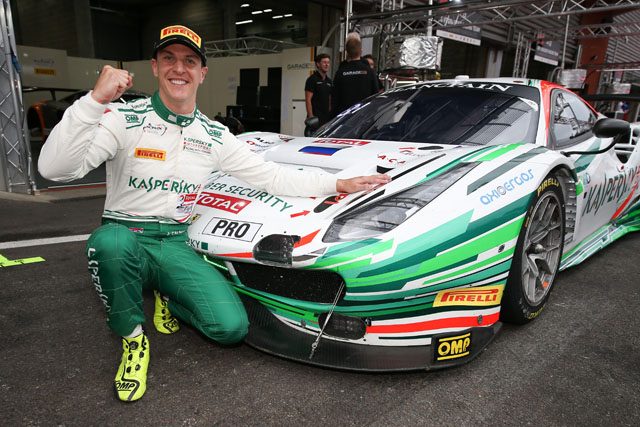 Ferrari has sealed pole position for the Total Spa 24 Hours of Spa after James Calado set the best time in Super Pole in Belgium.

Calado piloted the #55 Kaspersky Motorsport Ferrari 488 GT3 around the Spa-Francorchamps circuit in 2:17.390s to edge out the #63 Lamborghini of Mirko Bortolotti at the front of the 63-car grid.

Having been third fastest on Thursday, Calado was one of the last out, setting his best time on the second of his timed laps.

“I didn’t think pole position was possible,” said Calado, who will co-drive with Giancarlo Fisichella and Marco Cioci.

“I made a really, really good second lap. The car was just unbelievable and the team is working really well.

Audi DTM driver Jamie Green was the first out in the session in the #17 Audi, setting an early marker of 2:18.414s which would ultimately prove good enough for just 18th place.

Laurens Vanthoor quickly bettered that effort in the #117 Porsche 911 to hold top spot for the first half of the session with a best effort of 2:17.674s.

Australian GT regular Kelvin van der Linde went third fastest on his first flying lap in the #76 Audi, before posting a 2:18.164s to end the session half a second off the provisional pole time at that point only to end the session 12th.

However, before Adam had a chance to improve, Bortolotti laid his claim to pole position in the #63 Lamborghini on a 2:17.447s, only to be beaten in the final moments of the session.

That time was ultimately beaten by Calado, who then survived the best efforts of Raffaele Marciello and Frederic Vervisch to be confirmed in pole position.